Posted on March 9, 2020 by stevescountry 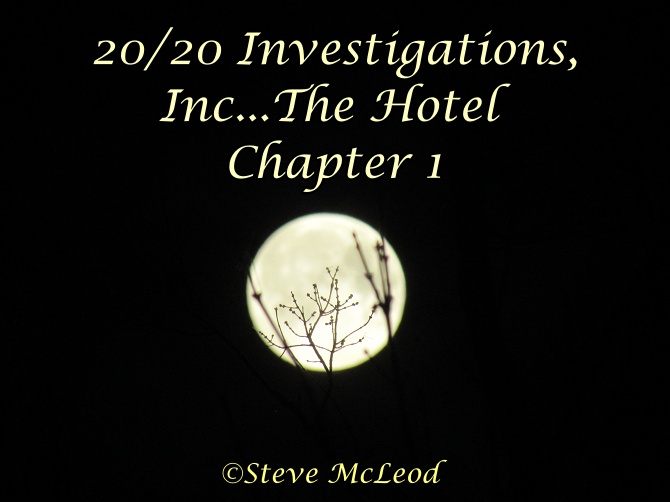 Well, here we are, on our way to our next case and new adventure in the American west.  The plane will be landing soon, the trip has been rather uneventful, but I feel a bit uneasy right now.  There is a rather large man on the other side of the plane that keeps looking over this way and talking with a woman beside him.  Probably nothing to be concerned about, but I sent Muffin over to check on things anyway.  She comes back with the man’s wallet.  One of these times she’s going to get caught doing that.  I copy down the man’s name and, hmm, a business card that says he’s an insurance investigator.  That’s interesting.  I give the wallet back to Muffin and she returns it.  When she comes back she meows quietly to me that he mentioned a hotel in the forest somewhere.  That’s even more interesting.

The plane has landed and we enter the airport.  What a crowd, how will we find the woman we are looking for here.  Hmm, my name is being paged so we head off to the location mentioned.  The woman’s name is Jessica Collins, I have her picture and she is a very beautiful woman with long brown hair and brown eyes.  She claims to be 35 but looks much younger, but perhaps it’s an older picture.  There she is now and she definitely looks young.  We have a brief introduction, poor Jessica looked quite puzzled when she found out that my partner was a cat.  I assured her that Muffin was very good at her job and helped out a lot in our cases.  Okay, she said, time to go, it’s a long drive and I will fill you in along the way.

Apparently Jessica and her husband both had a dream to own a hotel and they fell in love with this place when they saw it, so they bought it.  She said the place needs work to make it usable again but they didn’t mind that.  There is an old gold mine behind the place and the hotel was originally used as a place for the workers to live.  Then the mine closed around 1910 and the place was converted to a hotel.  The original owners disappeared mysteriously in the early 1950s and the hotel has been abandoned since then.  The relatives sold it to Jessica and her husband Bill.

One day Bill didn’t come in for lunch so Jessica went looking for him all through the hotel and couldn’t find him.  So she went out to the mine and he was there, but dead.  Seems a rock had fallen on his head so the police figured it was just an accident.  Jessica doesn’t agree.  She said Bill would never go into the mine without wearing a hardhat.  Plus, he would have had to go through the kitchen to get out to the mine, and she was in the kitchen the whole time.  I suggested he could have gone out the front door, but Jessica said the hardhats were by the kitchen door.  Hmm.  Muffin meows quietly to me.  Meow, meow.=Sounds like a good time for us to leave.  Forget it Muffin.  Jessica said, wow, that was a big sigh from Muffin.  Does she do that a lot?  Yes, she does, I replied.

Finally after a 3 hour drive on a very rough road we arrive at this hotel in the middle of nowhere.  Why would anyone want a hotel out here?  It has a beautiful, large porch out front with large log columns.  There is some nice antique chairs and rocking chairs on the porch and a nice swinging bench on one end.  Jessica and Bill had just bought the place a month ago, not a very good beginning to their hotel adventure.  But Jessica is determined to carry on with their dream.  She lives way out here by herself except for a handyman that comes out to help with different things around the place.  She stops the truck in front of the hotel and we all get out.  Something is wrong, says Jessica.