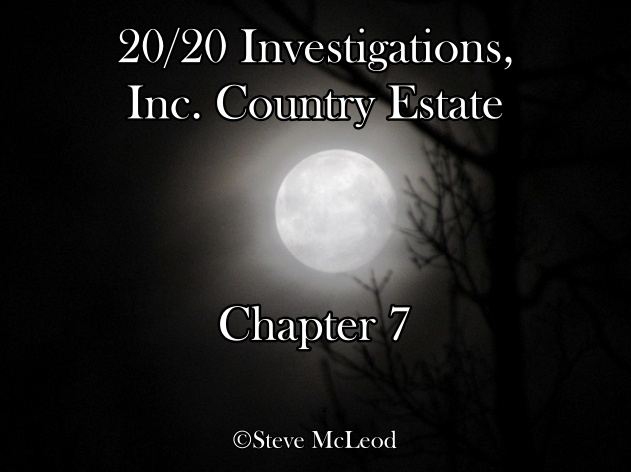 I already knew what I was going to find, I could tell when that flash of lightning lit up the room. When I got to him, Dave had been tied to a board to make him stand up, he was dead. I dragged him out into the hallway and told everyone to come with me. We all need to stay together now, I said, it’s just too dangerous to separate even for a short time. Meow!= We agree!, said both cats at the same time. Yes, I think that’s best, said Jessica, I’m really scared now. After getting to the bedroom where I had put Anna’s body, I said, it means that someone else is in this house, both my suspects are now dead. Meow, meow!=Ghosts!, said the cats together. No, not ghosts, I said, stop talking like that. They both give a big sigh.

Jessica and I put Dave’s body on the bed. He’s a big man, I said. Yes, said Jessica, he could easily take care of himself in a fight. He certainly lost this fight and had been stabbed. This likely means there is more than one other person in the house beside us. Meow, meow!=Too many ghosts, we leave now. We don’t have a car, remember Muffin? Meow.=Nice night for walk. No Mr. Cat, that would be a long walk and there is still a bad storm out there. More sighing from the cats. We get back to the living room and Jessica starts lighting some kerosene lamps and candles. That makes it feel better, she said. I had to admit, it was much nicer with some light.

Then suddenly Jessica yells, Steve, look! And she pointed to the corner of the living room. I think the poor cats lost half their fur when she did that. What am I supposed to see? It’s gone, she said, it was a stairway going upstairs. I look at the corner again, then at Jessica. I’m not crazy, she said somewhat angrily. It could be an effect of that drug from earlier, I said. Plus we are all a bit nervous and upset, and with the light flickering it could look like stairs. Jessica looked like she was ready to hit me, so I decide to take a look at the corner. Muffin and Mr. Cat join me. Meow, meow.=This is door, said Muffin. Meow.=I agree, said Mr. Cat. Hmm, the kitchen is right beside here, there could be room for stairs alright. Let’s go back in here where we found Dave, I tell everyone.

Meow?=Why he likes to play with ghosts? Meow, meow.=Don’t know, he always enjoy looking for ghost. Very strange. Meow.=I agree. Someone had to put Dave in here quickly, I said, so I think this old cupboard is actually a door. Meow.=Yep, is door for sure, said Mr. Cat sniffing around. Meow, meow.=I agree. Naturally she would. Must be locked on the other side, I said. Hold the flashlight for me Jessica. Not a word. I turn around and Jessica is gone. We run into the living room, but still no Jessica. However, that stairway in the corner is open now. Did she really see it before, or did she just know it was there?

Meow, meow.=Not like this, could be trap. Meow.=I agree, not trust Jessica anymore. Yes, Jessica could be leading us into a trap, or someone could be using her as bait to get me. But why me? That certainly doesn’t make sense. Well, we may as well check it out. I shine the flashlight up the stairs, nothing but a wall at the top. Should we go up there? Oh well, up we go, staying close together. Suddenly the stairs gave way and we fell down into a hole. Everyone okay? Meow, meow.=You had to go chasing ghosts, now we trapped in hole. Hey, there’s someone else in here, I said. Meow!=Ghost!, said both cats together. Where’s my flashlight? There it is, but it broke in the fall. I get out Muffin’s mini headlamp and shine it on…I don’t believe it!