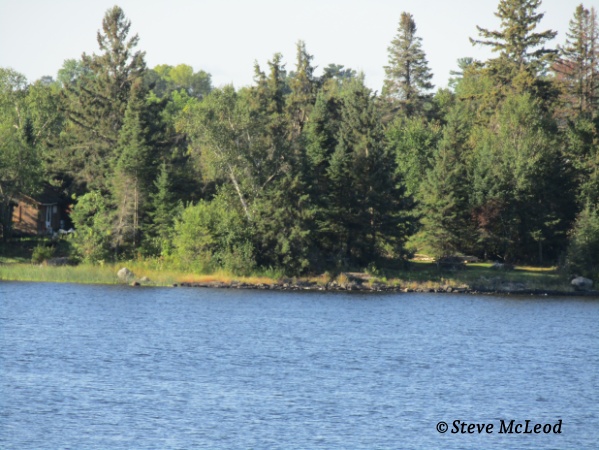 Once we got on the hill dad sat down on the only rock large enough to sit on. “There’s nothing to for me to sit on,” I said. “There’s an old stump over there,” dad pointed out. “That has to be 50 feet away,” I said. Good, was all dad said in reply. Very strange thing to say. Dad got his thermos of coffee out and set his cup on a smaller flat rock beside him. Now, it’s not my fault he didn’t tell me that and I dropped another flat rock on the rock where he put his cup. We both heard the crunch. Dad just looked. Then he said, “why me?” “I wanted to be closer,” I said, “so with two rocks it’s high enough to sit on, that way we won’t have to yell at each other.” “Don’t count on that”, dad replied. Not sure what he meant by that. He often talked in riddles.

“Who put the lid on my thermos?” he asked. “I did”, said I. “Why did you put it on so tight?, he asked again. “You told me to put it on good and tight since last time it wasn’t tight enough and it leaked in your backpack, remember?”, I answered him while getting my lunch out. “I can’t open it, what did you use to close it, a wrench?”, he asked. “Yep, how’d you guess?”, I responded. Dad just looked at his thermos. Seemed like an odd thing to do. “Looking at it won’t open it”, I said, then started laughing again. “Ha, ha,” said dad, “you try opening it.” So I did, and handed it back to him. Dad just looked again. “How did you do that?”, asked dad. He obviously wasn’t watching me. “I used the wrench,” I said calmly. “Bonehead!”, said dad, “why didn’t you tell me you had the wrench?” “You didn’t ask”, I said while munching on my sandwich.

“I don’t have a cup,” he said finally. “You should have been more careful,” I reminded him. “I should have stayed in bed this morning,” he replied. “Don’t forget, this was your idea,” I said. “Don’t remind me,” he said quietly. Very strange thing to say, I thought to myself. Dad decided to drink right from the thermos. “At least you remembered to put milk and sugar in this time,” he said. “Actually mom made the coffee this morning,” I told him. “That’s why it’s so good this time,” remarked dad. Not sure what he meant by that, he never said that when I made the coffee. We were soon on our way and finding a few insulators but nothing special. Then we came to a hill, a very steep hill. “Guess we’ll have to walk around this one,” I said. “Not a chance,” said dad, this is a tough hill to climb which means no one is likely to go up there and that means there could be some very nice insulators just waiting to be found”.

“How are we supposed to get up there?,” I asked. “Not we, you,” said dad. Naturally. “I’ll give you a boost,” he said. So we tried that but I still couldn’t reach the ledge we were aiming for. From there I should be able to climb the rest of the way. “Maybe if I stand on your shoulder’s,” I suggested. So we tried. Standing on dad’s shoulders I could almost reach the ledge. I tried to stand on his head. Dad screamed. Then he moved and my foot slipped right down the side of his head. Dad screamed again. Then I was trying to just keep from falling, holding a little bush and moving my feet around and dad trying to grab my feet! We must have looked quite a sight. Finally I got back down. “This isn’t working”, I said. “We just need a little more height,” said dad.

“Why don’t we move that flat rock over here and you can stand on that, should be just high enough,” I remarked. Dad looked at the rock. It was nice and flat so dad figured it would work. Amazing he would go along with that. “Your ear is bleeding,” I said, “and you have a scratch on your face.” “It’s amazing I still have an ear,” he remarked. We both worked at that rock to put it in place. “Moves a bit,” said dad. I brought over another small rock and stuck it under the one end. Perfect. Dad got on the rock, no movement at all so he was satisfied. He should know better by now. Back on dad’s shoulders. I could reach the ledge now and there was a nice rock I could grab and by quickly standing on dad’s head I was able to pull myself up. I knocked some dirt and small rocks down in the process. I could hear dad scream again. He said something about all the dirt and rocks on his head. He should have been wearing his hat. Dad walked down the tracks and was going to help me get down on the other side. That should be interesting, especially if I find a lot of insulators.