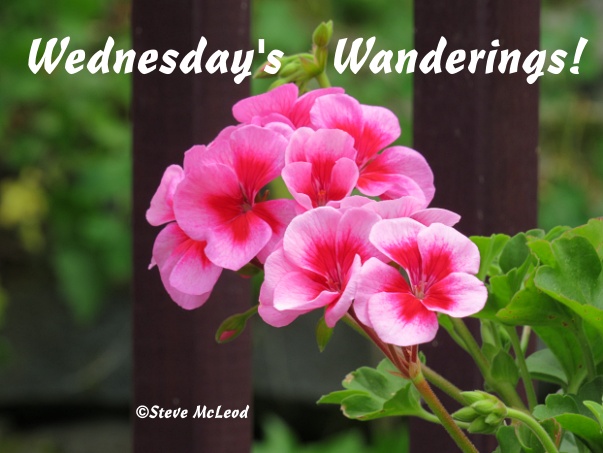 Good morning everyone on this beautiful Wednesday! Most of the smoke cleared away overnight and we even had a light shower. Not much rain, but it helps to wash the dust off the plants, and my deck. But perhaps other areas received more than we did, that would be nice. It is so dry here now that the wildflowers are not doing well either. Most are just withering down to nothing, the few that are blooming have very small flowers or flowers that did not form correctly. That’s making it harder to get pictures.

Not much in the way of bird pictures since I’m not feeding them right now, and now not much in the way of wildflower pictures. I usually like to get as many different pics as possible in the summer to help through the winter months. There’s not a lot of variety in the winter, especially if we don’t get many birds, so having some extra summer pics is nice. That’s why some pics don’t get shown in the summer, I deliberately save them for winter. The dryness is even affecting the insect population. Dragonflies that were so abundant earlier are now getting hard to find. There should be new varieties showing up now for the summer but I have not seen any of them yet.

Mushrooms are another one that are just not growing this year, they need more moisture in the ground. However, that could change yet for mushrooms. But other things will be lost for this year now. So far the butterflies are doing okay, except they are very hard to photograph, at least certain varieties. But some will soon be gone, like the swallowtails. I’m still trying to get their pics, and also the white admiral, which isn’t white, but that’s what they call it. Every year is different and has it’s own challenges. But if it was always easy, it wouldn’t be as much fun. A little easier would be nice though. Hehe.

My internet is working properly now, it was definitely the right choice switching to a new ISP. It’s going to warm up a bit this week, up into the 90sF (32-33C) by Friday. Then back to normal summer temps next week. The squirrels are out there fighting over the peanuts and Chuck the crow is trying to get in there too since he also likes peanuts. There is at least 4 squirrels, Jasper, Freddie, Slim and Chase. Jasmine hasn’t been here yet or she would get rid of those other squirrels in a hurry. In between, the chipmunks come and get some peanuts. There are no peanuts out there however, I’m trying to discourage some of the squirrels.

But when the chipmunks show up I hand them some peanuts. The squirrels are still fighting after 20 minutes, and there’s nothing to fight over. Guess I will have to go and sit out there for a while so the chipmunks have an easier time. Have a beautiful day everyone and God bless!