Posted on April 7, 2020 by stevescountry 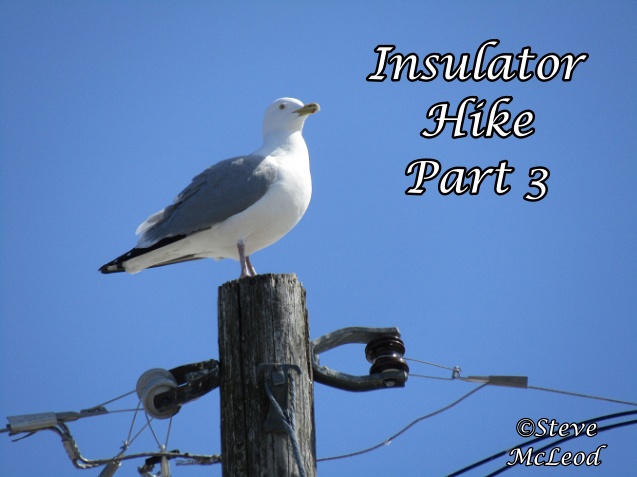 Hi everyone and welcome to part 3 of our exciting adventure out looking for antique insulators.  I was getting a bit interested in them by this time which made the trips more fun, besides all the fun we had in finding them.  I’m still amazed that dad kept wanting to go out looking for these things considering all that happened to him.  But he even would laugh at all these adventures too.  So let’s get going with the conclusion of our insulator hike!

We each sat down on a rock, which were nice and mostly flat and just the right height for sitting on.  I had put dad’s lunch in his backpack like he told me to do.  I saw him looking at his sandwiches.  What’s wrong?  They’re all dirty, he said.  That’s because your backpack is dirty.  Why didn’t you put them in a bag?  There wasn’t any left.  How come yours aren’t dirty?  I wrapped mine in paper towels, I said.  Why didn’t you wrap mine in paper towels?  Don’t you remember?  I asked if you wanted paper towels with your sandwiches and you said no.  Dad just stared and shook his head.  Then he came over and took my other sandwich and tossed his away.  Hey, that’s my sandwich, I said.  Not now, said dad with a smile on his face.

He actually managed to pour his coffee without spilling it this time.  When he finished my sandwich he asked where the pie was.  I ate it already.  Half a pie?  I was hungry and you ate my other sandwich.  Dad just stared.  How come there’s only one cup of coffee in my thermos?  That’s all the coffee that was left, I said.  That’s because of that monster thermos of yours, said dad.  I get thirsty, I said, but you can have what’s left of mine.  Thanks, said dad as he held out his cup.  I poured the coffee into it without spilling any.  That’s it?  That’s only half a cup, said dad.  Like I said, I get thirsty, it’s all that walking.  Dad gave out a huge sigh.  While dad was finishing his coffee I went walking around.  Hey, I said, a pile of cross arms over the side of the hill.  Dad came to look.  Good, he said, they’re full of insulators too.

No point both of us going down there to get them, you climb down and toss them up to me, he said.  Naturally.  I think he was just afraid of wasps or bees living in that pile of cross arms.  Anyway, down I went and starting taking the insulators off and no bees or anything else showed up.  Ready?, I asked.  Yep, start throwing.  I tossed one, didn’t make it.  Toss harder, said dad.  I did and dad caught it perfectly.  Okay, he said, keep them coming.  So I did.  Dad caught them nicely, but then for some reason he took a little longer than usual getting back in position so my next insulator hit him on his side.  Ohhh, was all I heard as I let loose with another one before I could stop myself.  Poor dad, he had stood right up and turned so that last insulator hit him right in the stomach.  Another “ooooh” and he sat down rather fast.  Unfortunately he landed on some of the insulators.

AAAAAAAAAAAAAAA!!!!! He yelled!  Wow, you’re getting kind of noisy up there, I said.  Bonehead, he called back.  What an odd time to be enjoying himself.  Finally he looks over the edge again, any more?  Just 2, I said.  Toss them higher this time, said dad.  So I tossed one higher.  Perfect, said dad, that way I don’t have to bend down to catch them.  Last one coming up.  Guess I tossed that one a bit too high, dad jumped, but still missed it and I could here the sound of breaking glass.  Oh well, I thought, it was a common one anyway.  When I got up there dad was looking at the broken glass.  He had put the only purple one off away from the others to keep it safe.  That last insulator he missed landed right on it and smashed it to pieces.  Amazing how that common one didn’t break at all, I said.  Dad just shook his head.

All the way back home he kept talking about that broken purple insulator and how I was the only person that could break it from that far away without even seeing where it was sitting.  I’m sure there are others who could do that, I said.  Dad just looked and said, never.  Oh well, we had fun anyway, I said.  Dad said, “we”?

I hope you all managed to get a laugh or two from this adventure with dad and I.  Have a wonderful day, stay safe and God bless!