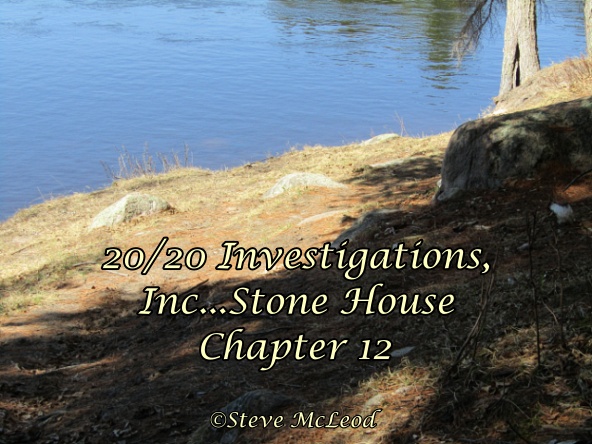 Dave, the pilot, was talking with someone, perhaps our next contact, but something was wrong.  Finally Dave tells me that members of the crime group are waiting for me at the airport, so we have to go with the alternate plan.  I really don’t like when plans are changed at the last minute, but what can I do?  Dave tells me to write things down, and Muffin is there listening intently as well.  She wants to know what is going on.  Dave will stop briefly at a small airport and drop us off.  There will be a car there waiting for me.  In a box at the back of the plane are the keys, number plates, driver’s license and registration for the car.  Plus there are directions to a small town where JR will be waiting at a small sidewalk cafe.

I asked Dave why these people are still after us since I gave the information over to the police already.  Dave told me I gave them false information, the police officers that took it are part of this crime organization, but they wouldn’t know it was false.  When they found out, you became a hunted man, said Dave.  That’s nice, I said, now what?  Dave added, it would be no point for you to quit and go back home, they would just follow you anyway.  We just have to fight this thing until we can get that info to the right authorities. So I ask Dave if JR has the correct info.  No, said Dave, you still have it, in your backpack.  I checked right away and sure enough, it was there.  Okay Muffin, this is what we are going to do.  Meow.=Right.

Can I trust the police anywhere right now?  No, said Dave, you can’t, so try to avoid them. Thanks, I’ll try to remember that, I said.  Dave just laughed.  Well, here we are on the ground once more and running for the waiting car.  By the time we reach the car, Dave is already back in the air heading for the original airport destination.  He’s hoping to delay these guys for awhile to give us more time to get away.  It doesn’t take me long and we are heading down this road to a small town not too far from this tiny airport, if it can really be called that.  This small town turns out to be quite a bit bigger than Dave thought so it took me a while to find the right street.  Fortunately I found someone who could speak good English and he gave me good directions.  That must be the cafe we want Muffin.  Meow!=It’s JR!

Sure enough, Muffin was right, there she was sitting at one of the tables.  Her name is Jenny Ringquist, a woman I haven’t seen or heard from for 6 years now.  She is from Sweden, though her mother was from England originally.  I figured it had to be her when I heard her voice in that tiny underground room.  She really hasn’t changed in these last 6 years.  Jenny if fairly tall, with shoulder length blonde hair.  Her name means “fair one” or “white wave” and certainly fits Jenny well.  Her name is actually Jennifer, but she has always used Jenny since we were kids.  I knew she got married 3 years ago so I wonder where her husband is now in all this mess.  I stop next to the cafe and Jenny comes over and jumps into the car quickly and says, let’s get out of here.  So I drive away, not really knowing where to go.

Jenny turns and says, “hi Steve, sorry for all the mystery”.  Jessica told me you were now a PI and a good one too, which is why I hired you.  I certainly need you help.  Muffin came over to give her a big hug.  Oh Muffin, I missed you so much, she said.  I heard you had gotten married Jenny.  I did, but Max was killed a year ago in an accident, at least that’s what it was called.  I didn’t believe it so I started doing some detective work on my own.  That’s how I found out about this whole big crime organization.  My husband was part of it and our marriage was just a cover for him.  Apparently Max had been stealing from the organization, so they killed him.  Take this road, said Jenny, which I did.  Then I thought of something, that’s it!