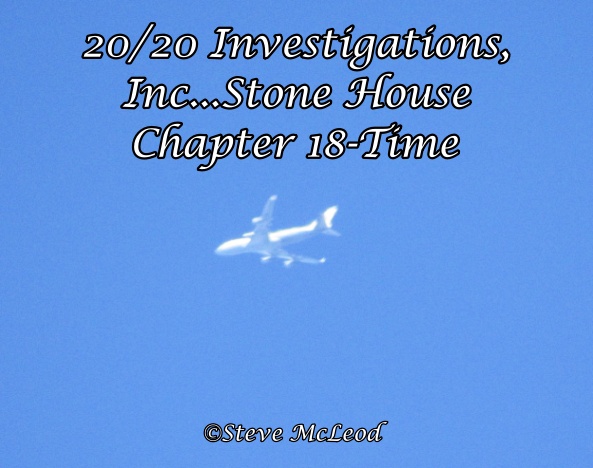 These guys were not very punctual, which was a good thing, gives more time for Muffin.  They finally showed up around 10:30 and took me to a house on the edge of a small town.  They pushed me into a small bedroom and I landed on the floor.  I picked myself up and laid down on the bed.  Shortly after they pushed Jenny into the room as well.  She was sitting on the floor, crying, she had been beaten quite badly.  I help her onto the bed.  I guess I was wrong about Jenny, she obviously doesn’t work with these guys.  They keep asking me where that black case is, she said, and I tell them I just don’t know.  I did tell them that you had it which is why they went to get you.  I’m sorry, she said, crying.  That’s okay, it was bound to happen sooner or later.  Did they get Muffin too?  No, she was off somewhere at the time they picked me up, but I don’t know what’s going to happen to her now.

That’s too bad, she said, I feel responsible for that.  Don’t worry about it, I said, things happen.  Finally a guy comes in named Freddie.  He’s about 6′ 5″ tall and weighs about 300 lbs, and he’s not at all fat.  Another guy comes in and asks me where that black case is located.  I just said “forget it”.  And beating me won’t get you an answer either.  We wouldn’t think of it, said the smaller guy, we’ll just keep beating your girlfriend here until you tell us what we want to know.  Then they took Jenny to another room where I could hear the screams as they beat her.  Then she was tossed back in the room.  Hmm, they did a good job, guess I shouldn’t disappoint these people.  Please Steve, tell them where it is, I can’t take anymore of this, said Jenny.  A very simple hiding place, I said, under one of the seats in the last plane.  What?!  Jenny called for Freddie.  Did you guys search that plane?  Yeah, we looked everywhere.  Under all the seats?  All but the back one, said the smaller guy, after all that’s a dumb place to hide something valuable.  The most simple place is often the best place, I said.

Call the pilot and tell him to get here quick!  You don’t seem surprised Steve?  No, not at all, I can tell real bruises from fake ones.  He’s away and can’t make it here until 11 tomorrow morning, said the smaller guy.  Well, looks like you get to live until then, said Jenny.  I can get rid of him now boss, said Freddie.  We have to wait and make sure he’s telling the truth.  However, teach him a little lesson anyway.  Sure thing, says Freddie.  After his “lesson” I could barely move.  It was a long night.  Did Muffin find help?  Is she okay?  This isn’t looking good.  Morning arrived and it seems the pilot will be here a little sooner than he thought.  Not good.

Muffins new friends were up and on their way with Muffin at 3am and got to Rossana before 9.  Muffin was so excited to see Rossana!  Meow, meow!=Must work fast, my human in big trouble!  The older lady handed Muffin’s backpack to Rossana and refused to take more than what they needed for expenses to drive there.  Muffin said good bye to her new friends, then she opened the top pocket of her backpack and pulled out a letter to Rossana.  She could barely believe what she was reading, then she took out the papers that had been in the black case, plus the jewels that had been hidden in the lining of the case.  Millions of dollars worth of diamonds, emeralds and rubies!  Muffin got Rossana’s attention to take off Muffin’s collar and Muffin pushed one of the buttons on it.  That showed a link to my watch so they knew where to look for me.  That’s not far from here, said Rossana!

Jenny came back into the room and tossed the black case at me!  It’s empty, she yelled.  Naturally, I wasn’t going to leave all those jewels in there, someone might steal them, I said.  He needs another “lesson” Freddie, but I want him able to talk.  After that “lesson”, I wasn’t sure if I would ever talk again.  Jenny comes back in.  Well, ready to talk now?  I look at her and manage to say, “Too late Jenny”.  I close my eyes…