Posted on November 9, 2020 by stevescountry 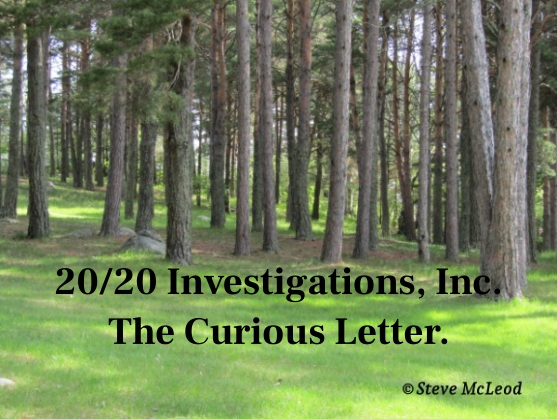 Meow, meow!=Hurry, hurry! We have to find Mr. Cat right away! You take too long, hurry! Poor Muffin. She was running in circles. “Hey kitten, slow down, you’ll wear yourself out before we even start looking,” I told her. I was ready finally. “Okay Muffin, let’s get going,” I said. We went to the kitchen first to let Charlie know we were going out, but all 3 of them were in there. “Mr. Cat is gone,” I said, “we have to look for him, we have already checked the other rooms.” Lena handed me a note, “grandpa found this on the kitchen table.” It was a simply worded note on a torn piece of paper. ‘Go home. You have lost one cat. If you stay you will lose the other cat. Then you lose your life. Your choice.’ It was written in french, but Lena interpreted it for me.

Muffin looked at me. “We’re not leaving without Mr. Cat Muffin, so don’t worry,” I said to her, “we’ll find him.” “We’re going out to look around,” I said, “not sure when we will be back.” “I packed some food for you two, I knew you would want to look for him,” said Lena, “and I’m going too.” “It’s better for you to stay behind,” I said. She went out the door ahead of me. “Are you coming?”, she asked. I guess she’s coming with us. We looked all around the farm buildings but Mr. Cat was nowhere to be seen. Could they have taken him somewhere else? If they did we will never find him. He does have his special collar on, but we are not getting a signal from it. Maybe they took his collar off? Did they kill him? I don’t even want to think of that and I’m certainly not going to mention that possibility either.

Now I wonder where Muffin went, I thought to myself. “Muffin is down at the other end of the field,” said Lena, “you can see her bouncing through the grass.” Lena and I must have been thinking the same thing. “She’ll be worn out quickly if she keeps that up, and she hasn’t eaten anything yet either,” I said. We checked the small fields near the farm but still no sign of Mr. Cat. Muffin came running back. She looked at me, she was so sad, and so tired. I picked her up. She put her head against mine and finally meowed. Meow, meow?=We find Mr. Cat? Please tell me we find him. “Yes Muffin, we will find Mr. Cat and if anyone has hurt him they will pay for it,” I told her. “There’s another field behind those trees,” said Lena, “and some old broken down buildings too, let’s check there.” “Good idea,” I said. “And I’ll carry Muffin for awhile,” Lena added.

I think Muffin enjoyed that and we were on our way. Lena didn’t mention just how far behind those trees we had to go, it was getting to be quite a walk and it was now noon. Meanwhile…Meow.=Ohhh, my little head still go ‘boing, boing’, not fun, and I still on big hill. Sun shining, it hard on eyes, can’t see good, not feeling good, I go sleep again, maybe I feel better. What happening to me? Where everybody go? I tired, sleep now. He goes back under the the pine tree and curls up in the shade on a thick soft mat of pine needles. We finally made it to that field Lena mentioned. Muffin took off right away to search the broken down buildings while Lena and I walked around checking all the junk that was lying around the field. Near to what was likely an old house, we found a well.

Someone had been walking around here before us. We looked into the well. It was deep. We both got that terrible feeling. “Muffin, come here,” I called. She came running over. Meow, meow?=You find something? “No, but I want you to sit on my shoulder and call for Mr. Cat as loud as you can,” I told her. She jumped up and started calling. Meanwhile…Meow.=What that? I thought I heard something, I turn ears…I hear again, it sound like Muffin, I call to her. Poor Mr. Cat, he tried so hard to call, but could barely get out a small meow. Meow…it is Muffin, I need to call…but so weak…can barely sit up. Finally he let out one loud and long howl! Meow, meow!=Over there, cried Muffin and off she went like a little gray rocket with Lena and I trying to keep up running through tall weeds and brush. “There he is!” I yelled.

Pictures of Mr. Cat, above, are supplied by his human, Nina.

Previous chapters and stories can be found on my home page under 20/20 Investigations, Inc.