Posted on November 17, 2020 by stevescountry 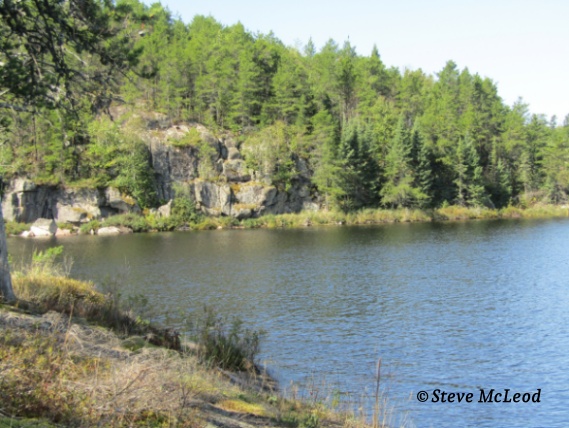 Dad sat down. Poor dad, guess he forgot he put his cup of coffee on the log and he knocked it on the ground. He let out a great big sigh and sat there looking at it. “You should be more careful,” I said to him. He just looked over at me. “Do you think you could toss me a boiled egg?”, he asked. “No problem,” I said and tossed it gently to him. Guess it went a bit high too, like his sandwiches which I had just tossed to him, and when dad looked up the sun got in his eyes. He put his head down fast and the egg hit him on the head and rolled off. Dad tried to catch it but hit it with his hand instead. That egg went flying right over the edge of the hill and into the lake below.

“Wow what a hit,” I said, “if there’s a fish down there he just got some lunch.” That did it, I couldn’t hold back any longer and started to laugh. Loud. And long. Dad let out another big sigh. That got me laughing even more. “I hope you didn’t eat all the cake,” he said. “No, it’s all here,” I answered. He decided to come over and get it this time. For some reason he didn’t trust me to toss the cake to him. Very strange. We decided to save some of our coffee for later and started to look around. Obviously a lot of people lived here at one time, there was quite a few buildings, two were quite large according to the dirt foundations. There was nothing left of the buildings however so perhaps whoever lived here took the buildings when they left. That made it look more like a logging camp because they used to do that sort of thing.

We found a couple of old sites where they had left their garbage, dad took one and I took the other one. For some reason dad didn’t want to dig too close to me. Very strange. Dad took the smallest shovel which was also odd. I wasn’t finding anything in my spot so I decided to go and see what dad was doing. “How’s it going?,” I asked. For some reason dad jumped and then sat down in the dirt. “Getting tired?”, I asked. Dad said I yelled the first time and startled him, which made him trip and that’s why he sat down. Very strange. Dad pointed out some old bottles he had found and then stood up to show me. Then he sat down again and started rubbing his ear. “Is your ear sore?,” I asked. “Bonehead,” he said.

He claimed I hit him on the ear with my shovel handle. Probably just tired. He decided to move over a bit, sit on a rock and have another cup of coffee while I did a bit of digging. Fine with me. I started digging vigorously and found a couple nice bottles and set them aside. I tossed the next shovel full of dirt the opposite direction and heard dad yell. “How do you manage to get me no matter where I am?,” he asked. Not sure what he meant by that. He was covered with dirt. It got in his coffee too. “You have dirt on your face,” I said, and started to brush it off. I forgot my hands were dirty which just made his face more dirty. AAAAAA!!!, and he started waving his arms, then he lay down on the ground.

He claimed I pushed him over the rock. I think he was tired, after all, he’s a lot bigger, how could I push him down so easily? He decided to take over the digging with my shovel. Fine with me. I sat down to watch and have some coffee. The third time he plunged that shovel into the dirt he started to yell and wave his arms frantically, then he ran away. Very strange. I went over to where he had been digging. There was still wasps swarming all over the place. Apparently they had a nest in an old tin can near the surface and dad hit it with his shovel. Finally dad returned.

“You shouldn’t have disturbed those wasps,” I said. “Oh but it’s so much fun,” he replied very sarcastically. “It’s amazing how many times you encounter wasps and bees,” I said. Dad just looked. He had only been stung a couple of times though. But dad figured it was time to leave. We took a look at those steps once more before walking down the hill. They had been well made, right from the top of the hill where those foundations were located right down to the lake. That was a long staircase. A lot of work went into that. But who really was living up there? It’s such an odd location. There were spots where they could have been lower down and closer to the lake. Very strange. But it was a nice detour from our fishless fishing time.

Well, I hope you enjoyed this little story from my journal and next time we will have something different to share with you. Have a wonderful day and God bless!