The Investigators, Inc. The Inheritance. Chapter 4.

Posted on February 8, 2021 by stevescountry 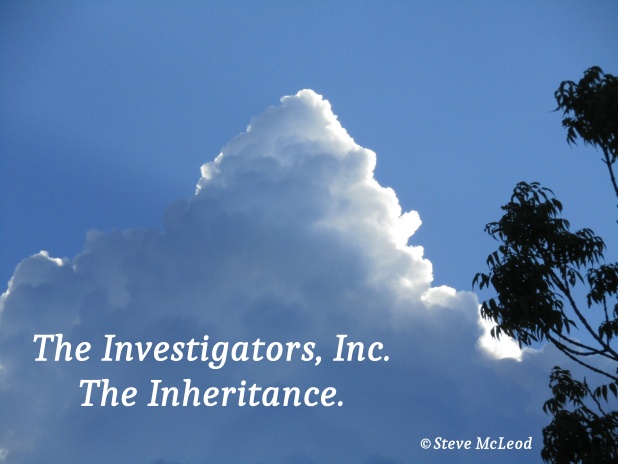 We found several rooms, all empty, and several dead end tunnels, but found nothing exciting. Some of those tunnels may have been blocked off at some point, perhaps because of cave ins. Finally we did find a tunnel that led to some stone stairs. We followed them up and a door opened at the end of the hallway in the guest cottage. For a large stone door it opened without a sound which was quite amazing. This is how someone could get in to leave us notes. But who, and why? It does give us some suspects now, which is basically anyone living in the chateau. So there is Linnea and 7 others who work, and live, at the chateau. Linnea seemed rather disappointed that we didn’t find anything and she was quiet as we walked back to the chateau for lunch.

After lunch Linnea, the cook and Linnea’s driver, whom I really don’t trust, all went to the nearest town for some shopping. I had asked if I could explore the rooms of the chateau that are locked and Linnea said it would be okay and gave me some keys that I would need. After they were gone the cats and I began our exploring, beginning with the tallest of the towers. It was beautiful and didn’t look like it had changed for centuries, except it had electricity now. Each room was filled with period furniture that looked as old as the chateau itself. Perhaps it was. I liked the top floor, it gave a beautiful view of the surrounding countryside. Meow?=You notice something in rooms? “What’s that Mr. Cat?”, I asked. Meow.=Room not big enough, outside bigger.

I looked out the window and sure enough he was right. I need to pay attention more. “How did you know that without looking outside?,” I asked him. Meow.=I remember how big when we look around outside. I just look at him. These cats do have fantastic memories. That’s a good thing to have in this business. Hmm, walking in those tunnels earlier, and now climbing the stairs, has really caused a lot of pain in my back. This could slow me down a lot in our cases which is not good. There was 4 comfortable looking chairs so I picked one and sat down. As I did one of the wood panels slid open revealing another hidden passageway. Sore back or not, we have to explore this new find. Meow,meow?=Maybe you sit more while Mr. Cat and me explore? Not want you get hurt. “Thanks Muffin,” I said, “but this looks too good, let’s go check it out.” Meow,meow.=Okay, I watch you close though.

I put their mini headlamps on and Mr. Cat took the lead while Muffin stayed right beside me and constantly looked behind in case we were being followed by anyone. Unfortunately our exciting passageway just led us down a flight of stairs and into the room below us. That was kind of strange. We came back down and Calanthe, the maid, met us and said that tea was ready if we would like some. That sounded good to me, a chance to sit for awhile. Calanthe said she would like to talk to me and I said that was fine. I asked about her name, it sounded nice. She said it meant “having the beauty of a flower”. It was certainly a fitting name for her.

She said there was strange things happening in the chateau and she thinks the same person who had been killing others in the past was out to kill Linnea too. Possibly someone who hates the family and wants to kill them all? Calanthe also mentioned that two of the servants had been killed when Linnea’s uncle owned the chateau. Hmm, that’s something that Linnea never told me. I wonder why? I asked if anyone working here now had been here when Linnea’s uncle was here. She said yes, her, the cook and the driver. The cook has been here since the uncle’s parents owned the chateau. Wow, that’s a long time to be working here.

Apparently she heard that the cook’s parents owned the chateau prior to that. Now that is very interesting indeed. Perhaps the chateau was acquired in a not so friendly manner? Anyway, the cook is now our main suspect. Just as we finished tea a violent storm hit. That rain poured down, there was continuous lightning and thunder, plus strong wind. Electricity was gone shortly after, then Calanthe informed me that the regular phone service was also off. She was visibly scared at this point. She also said that Linnea had called from town and said they would have to stay there tonight as the bridge had been washed out. Calanthe asked me if we would stay in the chateau that night. I told her we would. What I didn’t know…

44 Comments on “The Investigators, Inc. The Inheritance. Chapter 4.”