The Investigators, Inc. The Inheritance. Chapter 9.

Posted on February 17, 2021 by stevescountry 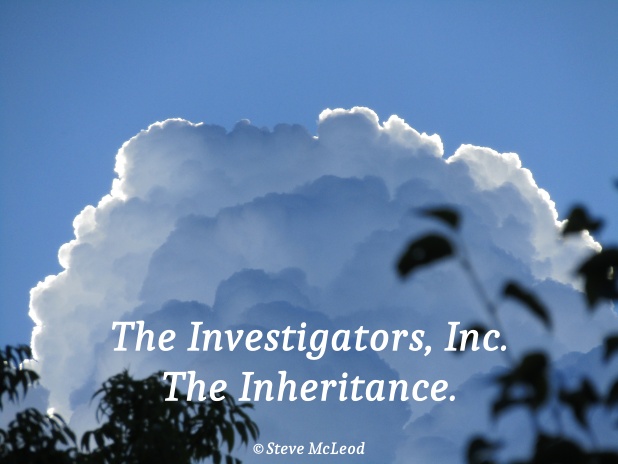 Then I remembered the book. “We have to get down to the library quickly,” I said, and off we went. Unfortunately that book was gone as well. “Our ‘ghostly’ friend doesn’t want me to read that one part in the book that talks about these notes,” I said to Calanthe. “Linnea has a copy too in her bedroom,” she said, “and there is a picture of Henri on her dresser as well.” “Let’s go,” I said. I unlock her door and in we go. MEOW!! Went both cats with their ears straight up! I look at them first, then over to the bed. Poor Calanthe collapsed to the floor. Linnea was laying on the bed, with a knife in her as well! She was positioned just like Giselle upstairs. I check to make sure she is dead, and she was. But how can this be? They were stuck in town, there’s no way they could have fixed the bridge already, that storm is still raging out there. I light a kerosene lamp in the bedroom, then pick up Calanthe and put her on the couch that was in the room.

Muffin stayed beside her while I looked around the room. A copy of the book was in the top dresser drawer, along with some more notes. “That’s Henri,” said Calanthe weakly. “I have never seen him before,” I said, “so why would he be after me? Unless someone hired him. Obviously the idea is not to kill me, but to hurt me, that’s why I’m being framed for Giselle’s murder, so I will end up in prison.” “Have you put anyone in prison because of any of your cases?”, asks Calanthe. “Yes, I have, but I’m sure they would just want me dead, not in prison,” I said, “of course, being in prison would be a good way to make my life hard and to kill me eventually.” Meow,meow?=What about human Gisela? I had completely forgotten about her, she was a rival we met in our final case last year, and she got away.

This would be just like her, she wants revenge, she definitely wants the cats and I hurt. Sending me to prison would hurt all of us for sure. This is certainly an elaborate scheme to catch me, would she go through all that work? Hmm, that last time we met was also an elaborate scheme to get at me. She failed that time, but…something tells me it isn’t her. I still haven’t met Francois, he and Karl must be here somewhere too. I think saying they were trapped by that washed out bridge was just a lie to fool us into thinking they were not here. “You are staying close to me Calanthe,” I said, “they seem to be wanting to kill women, which would put you next on the list. But the cats and I will keep you safe.” “I trust you,” she said, “and honestly, I have no idea what is going on here.”

We go back to the library so I can read this part of the book and try to piece together these notes. Now I’m beginning to wonder if the 2 vacationing servants are really here too. In the book, it was a single woman who owned the chateau, she was killed and her murderer was never found. Everyone suspected one of the servants but nothing could be proven. Now the notes, in the book many notes were given to the woman who owned the chateau, but only certain notes meant something, ones that had a dot in the corner. Okay, some of these notes have a dot, I start spreading them on the large library table. Let’s see…”chateau. mine. stolen. you. pay. everyone. die. sleep.”

Then there was that complete sentence that Calanthe saw, “I will hurt you like you hurt me.” That would suggest the person is not after Linnea since she is now dead, so he, or she, is after me because of something I did to that person. We head to the kitchen to get something to drink, all they have here is tea, no coffee, what a terrible thing. There’s a kerosene lamp burning so I go in first with Mr. Cat. Muffin stays with Calanthe in the hall. I call them in, no one is here. Calanthe makes some tea and gets some biscuits too and we go back to the library. Calanthe sets the tray on the table and turns around and almost screams. I turn and there is Henri sitting in a chair, stabbed, like the others. I check and he has no broken ribs, so he is not our ‘ghost’.

Photos of Mr. Cat are kindly supplied by his human, Nina.

Previous chapters of this story and other stories can be found on my home page under “The Investigators, Inc.” and “20/20 Investigations, Inc.”

37 Comments on “The Investigators, Inc. The Inheritance. Chapter 9.”