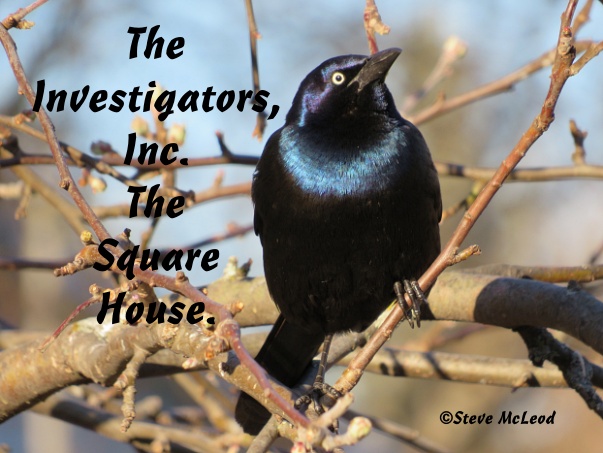 Well, it was back to the square house after I was patched up again. I did need some stitches for that, but it wasn’t bad. By the time we got back to the house it was daylight so no point in going to bed now, but I am hungry. Caren goes off to the kitchen to make pancakes for all of us. Muffin went to help. Mr. Cat and I went into the living room to relax until breakfast was ready. “You normally like to help making pancakes,” I said to Mr. Cat, “why not today?” He sits there looking at me with his eyes half closed. “Oh, I get it, you think I forgot,” I said, “or maybe thought I wasn’t going to propose, right?” Meow?=Well, what happen then? “I didn’t want to get her too excited, or upset, before breakfast,” I said, “that might not be so good.” Meow?=You still going to propose? Or you still worried about mining little tails?

“That’s minor details, oh, never mind that,” I said, “yes, I’m worried, but I’m still going to do it.” Meow!=That great news! Then Caren calls us for breakfast, though I was a bit nervous to eat very much. After breakfast I told the cats to stay in the kitchen while Caren and I went into the living room. Two little heads peek around the doorway into the living room. Meow,meow=Oooohh, he on knees, that perfect, and he get ring out now. Meow.=Yep, good part. Suddenly their ears go straight up and they start jumping around like kangaroos! “What’s with them?,” asked Caren. “I think they were listening at the door. Come on in you two,” I said to them.

They came rushing in and hugged both of us. “Well, does anyone want to start looking for the secret of this strange house?”, I asked. “If there is one,” Caren said rather skeptically. “Oh, I’m sure there is a secret,” I said, “we’ll check those two graves in the garden while we wait for Baldwin’s men to show up.” So out we went to the large marble monument that marked the two graves which were also capped with marble. The cats and I started to search that monument for some kind of a switch to open a door. “Aha, I think this is it,” I said and turned a round knob. One of the marble slabs began to open revealing stairs. “I don’t believe this,” said Caren, “these are not graves at all!” I went down first, followed by Caren and the cats.

There was a small room with 2 caskets. “Obviously it is still a grave, just something a bit different,” I said. Just then the large marble slab at the top of the stairs slammed shut! I got out my flashlight and the cats and I searched but could not find a way to open that door. “Well,” I said, “nothing to worry about anyway, from here there must be a tunnel to the cellar. I’m sure this is how your stalker was getting in.” “Um, what if he had a different way?”, asked Caren. “It must be this way, but if not, Baldwin’s men will be here soon. Actually, I’ll call them now to let them know where we are. Hmm, where’s my phone?” “On the counter with mine, we were charging them, remember?”, said Caren. “Oh, right, well, we still have the cats collars to use if need be. In the meantime, lets look for that tunnel,” I said.

So we began searching, but couldn’t find any sign of a tunnel. So I went over to the caskets and started to open one of them. Caren’s eyes got huge and she said, “you’re not opening those things are you?” “Sure, why not? If my theory is right, there are no bodies in here,” I said. I opened the lid all the way and removed a blanket. Caren and the cats couldn’t believe what they saw! It was nearly full of silver bars. I open the other one and it was full of various things, including gold and old paintings. “I just don’t believe all of this,” said Caren, “how did you know what would be here?”

“I’m a PI, remember?”, I said, “I found some information about a major theft of silver, gold and paintings from a museum. They had to wait for things to cool down before they could do anything, that’s when they made this monument to hide everything.” “It’s getting kind of warm, and hard to breathe in here,” said Caren. Meow,meow.=Yes, not much air left in little room. Someone shut that door deliberately,” I said, “could Gisela be back again? “Okay Muffin, time to call for help,” I told her. Meow,meow=I already try, but not work. Meow.=Yep, me try too, still not work. I put their collars on auto, so a distress signal will be sent every 60 seconds. I ask the cats to keep looking for a door, it’s better for them to move around then for Caren and I…

51 Comments on “The Investigators, Inc. The Square House. Chapter 17.”