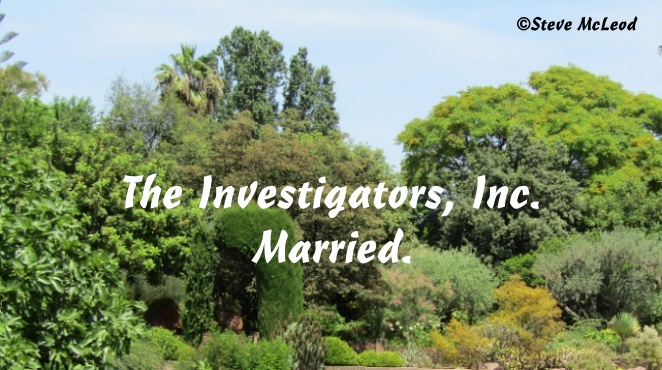 There was a loud bang and the door flew off it’s hinges and an armed man came bursting in! But Mr. Cat was ready and “Thwock!” and the man fell to the floor. Katharina quickly grabbed her gun and went to the doorway and looked into the hall, but she could see no one else. Meow,meow!=Quick, we move to next room! “I’m not sure it will help Muffin,” said Katharina, “they might want us to do that, there could be traps in there.” Meow,meow.=Oh, never think of that, my thinker not working, I too worried. “That’s okay Muffin,” said Katharina, “I think we are all the same way.”

Katharina put the door back in place and put one of the large chairs in front of it. “What else is in that bag of tricks?”, she asked. Meow.=Lots of things, you look. “Hmm, lots of cool stuff,” she said, “though I don’t know what some of it is, but I know the tools and that’s what I want.” She nailed the door in place, then moved a dresser in front of the door instead of the chair. Then she went to the big window and noticed that there was heavy sliding wood doors that covered the entire window. “Well, it won’t keep the rain out if the windows break, but they will keep people out,” said Katharina, “but now we are kind of stuck in here until Baldwin’s men come to get us.

But I guess that’s not so bad.” Then the voice of Gisela came again, “you stopped that man, but more will come, you can’t stop all of them.” Meow!=Up there, in ceiling, metal grate, that where voice come from. “You’re right M.C., let’s take that thing off and see what we find,” said Katharina. She pulled the table over and stood on that to take the grate off and sure enough, a speaker was there. Mr. Cat went in the duct and pushed it down, then said he would go exploring and not to tell Muffin until he was gone. “You be careful M.C.,” whispered Katharina. Off he went.

Muffin called her over, I was still very cold, back to warming me up again. Meow,meow?=Where my Mr. Cat? “Um, he went exploring, but he promised not to be long,” said Katharina. Muffin’s ears went straight up and she jumped to her feet. “You need to be brave and help guard Steve,” Katharina said. Meow,meow!=Yep, I do that, but wait till M.C. come back! Katharina giggled, then Muffin did too. Meanwhile Mr. Cat was walking around following the ducts to different rooms and finally made his way back to the lobby area.

He stood on the grate and jumped several times until it came loose on one side and he jumped down landing on a big soft chair. He heard people talking and went closer to the kitchen. He listened carefully while Gisela told her men what she wanted each of them to do. Off each of them went. As one passed a storage room, with Mr. Cat behind him, Mr. Cat scratched on the door. The man turned and M.C. ran around behind him again. Good thing it was so dark, although the man had a small flashlight, but he didn’t aim it toward the floor.

The man opened the door of the storage room and went inside, followed quickly by M.C. The door closed and “Thwock!” Meow.=That 2 down, and here it easy to get back in ducts, no grate on this opening. From the top of a cabinet he could easily jump into the duct, just perfectly. Then he made his way back to the room where we all were located. Meow.=Need help getting down. Katharina came and helped him. Meow.=I hear some things and know what they plan to do. He detailed the plans to Katharina and Muffin.

Meow,meow.=Okay, I forgive you not telling me you leave, this good information. “Yes, it certainly is,” said Katharina, “by the way, you two can call me Kat.” Meow,meow?=My human too? “Yes Muffin,” she said with a smile, “your human too.” Meow?=Maybe now we be really good friends? “I sure would like that,” said Kat, “but I guess after this I will be going to prison for a very long time.” Meow,meow?=Why you try kill human Lena? “My man was supposed to shoot her in the arm and leg, just to make it so she couldn’t help Steve,” said Kat. Meow.=But he shoot next to heart. “There’s no way,” she said in disbelief, “he was a perfect shot, never misses.”

Meow.=Hey, I just think, he shoot once, then I shoot him. “So someone else shot Lena who wanted to kill her,” said Kat, “one of Gisela’s men.” Meow,meow.=It good thing he miss, just little. Then just a little noise in the closet…

Previous chapters of this story can be found on my home page under “The Investigators, Inc.” More stories under “20/20 Investigations, Inc.”