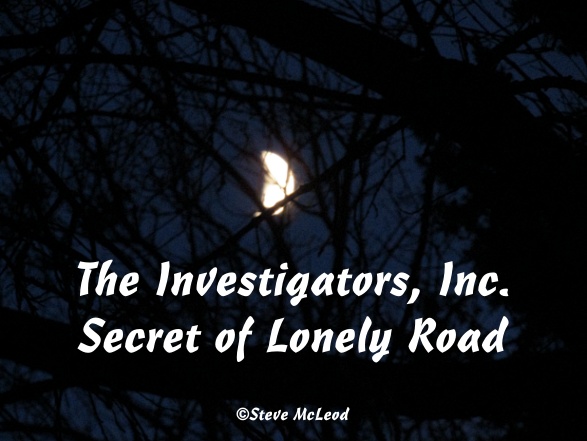 Well, it’s been a month since Lena died and our last case was finished. The cats and I have been slowly working on fixing up the main floor of our chateau, bringing it back to it’s original beauty. We have had to hire help for that, definitely too big a job for the 3 of us. It’s coming along very nicely, good thing we had photos of what it looked like originally. The cats now have 3 bedrooms full of their play structures, all joined together with tunnels and secret passages. They are having a great time. They even showed me another part they would like to get so I ordered it for them, but I haven’t told them yet. We all need our ways to relax. I’m working on making some nice paths through the wooded section of our property. That’s my relaxation.

I’m feeling great too, the medicine that Kat gave me worked fine. My doctor checked it out and made more in case I need it. I will always carry some with me, just in case. Kat has been working with Calanthe at her spa and resort for seniors. Calanthe is doing very well with her resort idea. Even Baldwin is having fun with it, and he has certainly become a great friend of mine. “Did you invite that old coot for dinner again?”, asked Martha, bringing me back to reality for a moment. “Yes Martha, all of them will be coming,” I said smiling. “That means I need to bake another pie, that old coot can eat one by himself!,” she said and stomped off to the kitchen.

I laughed. I could smell the pies already and I know she always makes enough. She complains about the “old coot” all the time and how much he eats, he doesn’t work enough, he doesn’t keep his beard trimmed properly. But I can tell she really likes him, and Baldwin likes her, even though he complains just as much about her. They need to get married. The mail has arrived, perhaps a new case? That’s just what we need now. At dinner I tell everyone about the letter.

“An older couple bought a country mansion at an auction, they were the only ones to bid on it,” I said, “everyone else said they were scared of the place. Apparently the original owners hung themselves and ever since odd things have happened at the mansion. The couple who bought it just laughed, but they soon found out everyone was right so they left. They want us to find out what’s going on. Sounds like an easy case, we have had similar cases before so lessons learned will be helpful. I like the address, number 500 Lonely Road.” Meow,meow!=That mean ghosts, we say no and stay home. Meow.=Sound interesting, and country mansion mean country mice, the best kind, I say we take case. Meow,meow?=How about I bite tail? “Just a minute you two, no fighting, we need a new case to keep us in shape,” I said.

Meow,meow.=Okay, maybe you right, not want to get rusty. “And I’m going along too,” said Kat, “I want to help out and this one sounds like great fun.” “Me too,” said Calanthe, “I really want to be on a case too.” “Wait a minute you two,” I said, “are you ready for danger?” “Sure!”, they both said at the same time. “And I told Calanthe she can go whenever she wants, pending your approval of course,” said Baldwin, “I can handle things here and it wouldn’t hurt for you to have some help now and then.” I smiled. “Perhaps you’re right,” I said. “we leave the day after tomorrow.” We flew back to the US, then rented a car and went to visit the owners briefly. Then we drove out to the mansion. “They certainly named this road right, we haven’t seen anyone for the last 100km,” said Kat.

“There it is,” said Calanthe, pointing to the number along the road. We turned in at the driveway, which was a bit grown over, and pulled up in front of the “mansion”. “That’s a mansion?”, asked Kat, “it doesn’t look like anyone has lived here for years.” “True, and that doesn’t really fit the description we were given,” I said. But I had the keys so we went to the front door which opened on it’s own. “Interesting,” I said. I went in first. The place was covered with a thick layer of dust, most of the furniture covered with sheets. “Our hotel for the night,” I said and laughed. The ladies just looked at me and said, “not funny”. Meow,meow.=Not like this place, we go home now. Meow.=Me have odd feeling, not sure what it is, but not good. Meow,meow.=That what I just say too. “Hey, we have a job to do and we will do it,” I said and brought in all of our luggage. There was no electricity out here, but we came prepared for that. I hope we can get some sleep tonight.

All pictures of Mr. Cat are kindly supplied by his human, Nina.

40 Comments on “The Investigators, Inc. Secret Of Lonely Road. Chapter 1.”