The Investigators, Inc. The Game. Chapter 13. 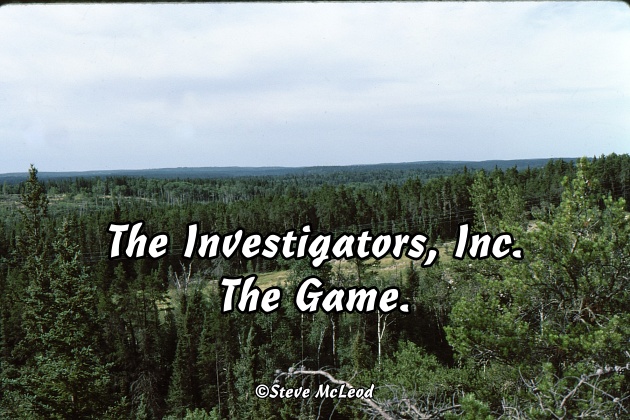 “This is crazy,” I said, “we go from one weird game to another.” “Do you think it’s possible to get her identity?”, asks Kat. “I don’t know, it won’t be easy that’s for sure,” I said, “I certainly can’t involve my connections in this, but they could direct me to the right department. Then we would just have to get in, get the info and get out again.” “Sounds so easy,” said Kat sarcastically. “Yeah, right,” I said, “it will take some real coordinated planning, with all four of us involved.” “But we don’t even know where the cats are right now,” said Kat sadly. “I’m sure they’re safe, we just have to find them,” I said, “but we will need them for sure.”

Meanwhile, back to the cats. It’s morning again and the cats have had their breakfast and just returned from the lake. Meow.=I need to see better. Meow,meow?=We see lots from here. Meow.=Chop, chop come from this way, right? Meow,meow.=Right, but… Meow.=And chop, chop go this way, right? Meow,meow=Yep, but… Meow.=Then maybe not far away. M.C. looks at the tall white pine where they sleep. Meow.=I climb to top, get better view. He runs to the tree. Meow,meow!=You fall down and break all your legs! Then how I help you? Don’t do it! Meow.=I be okay, you watch. Meow,meow?=How you get back down, you always have trouble coming down.

But M.C. was already climbing, up, up, half way he looks down at Muffin. Meow.=Oh my, I not look down again, get me dizzy feel. Up he continued going until he finally reached the very top of the tree and he sat on a small branch, with his eyes closed. Meow.=Good it not windy today, I die for sure. I need to open eyes though or I not see why I come up here for. He peeked a bit and he could see a lot farther away. He then opened his eyes wide and looked around. Meow!=AHA! That what I want to see, house over there. But why house is way back here? I go back down now. Oh my, not going to be easy. I go backwards. And he did.

He started slowly but he soon was falling fast down that tree, his little legs a blur as they went back and forth trying to hold on and trying to slow him down and suddenly…thud! He just sat there staring. Muffin ran over. Meow,meow?=You okay? You okay? Mr. Cat just sat, not a meow. Meow,meow.=Only one thing to do, slap, slap, slap! Meow.=Oh my, that not fun, not want to do that again. But I see house! And I see something else too, I see chop, chop! Meow,meow?=A chop, chop way back here? Maybe it same chop, chop. We go check. Meow?=But how we go check? Can’t get down cliff. Meow,meow.=Yep, that right, we already check that, no way down. They sit and look for a while.

Meow,meow?=You hear that? Sound like another chop, chop. Meow.=Yep, I hear, might be first enemies come back for another look. We go down to road and see. So off they went and hid in the bushes as the helicopter landed on the road. The door opened and Calanthe jumped out and started calling for the cats. They ran over to her all excited and into the helicopter they went! They told Calanthe and Jennifer about the house and the other helicopter. “Could be where they have Steve and Kat,” said Calanthe, “let’s go check it out.” Up they went and they flew just over the treetops once they got down past the cliff.

“Do you have anything to surprise these people?” asked Calanthe. “We have a machine gun and rockets,” said the co-pilot, “and we know how to use them.” Back to Steve and Kat. “Well,” said Anthony Jr., “what is your decision?” “I’ll do it, but you have to let both of us go, I need Kat to help me,” I said, “I’m overdue on my medication and I can still have attacks for 48 hours after getting it, so she has to be with me to help.” “I keep your wife until you get me the information,” said Anthony, “that’s the terms.” “Forget it then,” I said, “you may as well kill us now.

You know however, that you need us, you can’t find your sister without me, so I set the terms,” I said, “you have to let us both go.” There was silence on the other end. Then there were explosions outside. Two rockets hit the ground outside the house, another one destroyed the dock so the helicopter started drifting away. Another shot knocked the back tail off the helicopter. “They won’t be going anywhere,” said the co-pilot. Next they used the machine gun to clear the area while 2 men ran into the forest and one was swimming for the helicopter. Then they landed, the girls and cats got out, quickly running into the house.