Posted on September 2, 2021 by stevescountry 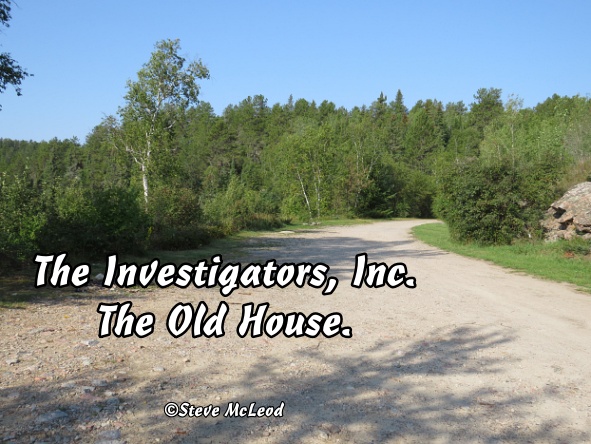 He then shot right at me and the lamp behind me shattered putting us in darkness again. I shot back, the cats growled and Kat woke up and grabbed her gun right away. By then the man was going out the bedroom door. I shot again and the cats and I followed him into the hall, but he was gone. The lights are always left on in the hall, we had been told, and that’s a good thing. But how did he disappear so fast? We searched the other 3 bedrooms and the bathroom, but there was no sign of the guy. If he had gone downstairs I would have heard him, they squeak terribly.

There’s a door at the stairs going up to the third floor which was locked. Susan said they keep it locked all the time. We go back to the bedroom where Kat was standing, ready to use her gun. She relaxed when we came back in. I shut the door, then put an alarm on it and on the window, just in case. It was my suitcase he had been going through, though I have no idea what he was looking for in there. I only keep my clothes in that one. But we checked everything just to make sure and I also put a scrambler on just in case, so we could talk freely. “Good thing he missed you,” said Kat. “He didn’t miss,” I said, “it was deliberate.”

I asked Kat to kneel where the man had been and point her gun at me where I was standing. The look on her face was amazing. “Steve, how could that be?”, she asked, “the lamp was right behind you. The bullet can’t go right through you!” “Yet it did,” I said, “and it smashed the lamp, and ended up right here in the wall.” I then dug it out and showed her. The cats ears went straight up. Meow,meow!=It is real ghost, and have ghost gun too! Meow!=Yep, Muffin right, there is ghosts! “There are no ghosts,” I said again to them. “Then how do you explain this?”, asked Kat, as she pointed to the lamp. “Simple,” I said, “this bullet was not fired from his gun. Go back to that spot and point your gun at me again.”

So she did. “Okay, now hold it like that while I use my pointer,” I said, “see how the bullet hole is off from where it should be. Yes, you are in the same position, or you would miss the lamp.” “I still don’t understand,” she said with a sigh. Meow.=So bullet come from different direction, maybe someone else in here too? “No M.C., he was the only one in here,” I said, “but come look at this.” “What is that?”, asked Kat. “This tiny device could be activated with a button in his pocket to smash the lamp,” I explained, “while he fired a blank. The bullet was already in the wall, it’s easy to tell it was planted there, probably while we slept.” “But how could we all sleep so that we wouldn’t be awakened by all this?”, asked Kat.

“I think we were drugged somehow, likely from gas blown into the room from somewhere,” I continued to explain, “it’s all meant to give the illusion of ghosts at work. And someone waking up suddenly from that gas could see almost anything believing it was real, so it’s easy to bring in ghostly visitors.” Meow,meow!=That not nice! We not get fooled again. Meow!=Me agree, next time we attack anyone come in here. “Well, those alarms will make sure we wake up if they try to come in here again,” I said, “but we bring our backpacks with us all the time from now on.”

Kat and the cats went back to sleep, but I couldn’t sleep. There are others here, but there isn’t supposed to be. How could Bradley and Susan not know that other people were here? Is something more going on around here than what we have been told? We need to be very careful from now on. At breakfast I told Bradley and Susan what happened. Poor Susan went so pale I thought for sure she would faint. Bradley was very calm about it, which is odd. They never heard any gunshots which is also odd, although they are on the opposite side of the house, and if they had also been given some gas it would make sense they wouldn’t hear anything.

After we finished eating I took them upstairs to show them the bullet holes, including the two I made. But there were no holes and the lamp was fine. “That’s the sort of thing that keeps happening around here,” said Susan. She was obviously scared. “Are you sure you didn’t just dream this?”, asked Bradley. “I don’t go around telling people about my dreams,” I said firmly. Just then Susan screamed and fell to the floor…

8 Comments on “The Investigators, Inc. The Old House. Chapter 2.”