The Investigators, Inc. The Painting. Chapter 6.

Posted on September 24, 2021 by stevescountry 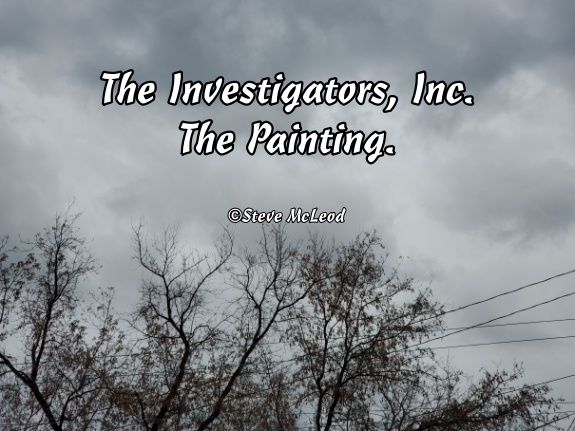 I pull out my gun and the cats take up positions around the room and the door opens. “Oh, I’m sorry,” said the maid, “I was just bringing you some fresh towels, Mrs. Hand said you were out.” Kat goes over and takes the towels and thanks her and she leaves in a hurry. Marven and Mable Hand are the new people claiming to be the owners of the Inn. “Do you think maybe we’re getting too jumpy?”, asked Kat. “Perhaps, but it’s good to be on the safe side,” I said. Well, the evening went by quietly and the cats took turns watching the car overnight, though we still checked it in the morning anyway since there was time last evening that someone could have done something to the car.

After a very good breakfast we went for our drive down the road and easily found the other road that led to the castle. There was nice rolling hills, some open fields and forested areas as well. We crossed over a meandering stream making it’s way around the hills, it was a beautiful sight. It seemed like a long drive though before we finally spotted the castle sitting atop the tallest hill in the area. It must have been quite impressive in it’s day, even now it stands quite tall and strong. There is a little parking area just off the road and a small path up to the castle, not one that sees much activity though. But that’s a good thing.

We don’t mention any of the information we have discovered, somehow I think they probably know we have been checking on them. We walk around the castle and Jessica tells us about a legend of the castle. “Actually, there are many legends associated with this castle,” said Jessica. “All castles have their own legends,” said uncle Benjamin, almost growling. He doesn’t seem to be in a good mood this morning. And his son Ben is keeping his distance from us, but I notice that Kat is watching him rather closely for some reason.

“That’s true uncle,” said Jessica, “but I like all these old legends, like this one. The king, about 700 years ago had a mighty prince, who was also his closest companion and he wanted to marry the kings daughter. The king was overjoyed with this, but the night before the wedding the princess was found dead, apparently she had killed herself. The king was terribly grieved over this and the prince vowed to find out who killed the princess, for he did not believe she killed herself. That night he too was found dead, apparently he hanged himself.”

“I like these old legends too,” said Kat, “I wonder who starts them and when do they get started?” “This one is supposed to be as old as it says,” said Jessica. Uncle Benjamin just kind of sneered and went over to his son. “Be careful Steve,” said Jessica quietly, “don’t trust anyone.” Then I told her about the owners of the Inn. She looked genuinely surprised and scared. “Don’t trust those new people,” she said, “they are not the owners, Jim and Melissa Farthington own that Inn, and have for 10 years.” “That’s interesting to know,” I said, “we’ll watch them for sure.”

Uncle Benjamin showed us the tunnel to get to where Jessica was staying. Kat drew a map of the route, which was a good thing, we turned so many times I lost what direction we were going. The cats were also marking the way as we went along. Then we departed and headed back to the Inn after Kat took pictures of the place. About half way back I heard a noise and it hit me we had forgotten to check the car before leaving the castle. I stopped and yelled for everyone to get out! We ran and hid behind some trees. Then there was some smoke from under the car and a loud voice that said, “Bang, you’re dead!”

I went back and located the fake bomb. “What was that for?”, asked Kat. “Someone just reminding us they could have killed us had they wanted to,” I said. Back at the Inn we relaxed for a while in our room before heading down for dinner. “That was kind of a scary warning,” said Kat. “True, so we will have to be extra careful about…” Then I stopped as I remembered the legend that Jessica told us. I grabbed my phone and called Baldwin, but Calanthe said he was at an important meeting in New York and he can’t be disturbed.

I asked about Brandi and Calanthe said she was fine. Then she asked why. “Do you have good security right now?”, I ask. “There’s only 2 guards here today,” she said. “Then get more fast and don’t let Brandi out of your sight!”, I said, “and I need to talk with Baldwin, now!” Calanthe didn’t hesitate anymore and got through to Baldwin. “Brandi’s in danger Baldwin, someone is out to kill her tonight,” I said, “and you’re next in line to be killed tomorrow! Get guards for Brandi and yourself, this is no idle threat, it’s real!” “I’m on it Steve!”, he said, and he was gone. I just hope…

Previous chapters of this story, and other stories in this series, can be found on my home page under “The Investigators, Inc.”

43 Comments on “The Investigators, Inc. The Painting. Chapter 6.”