Posted on November 24, 2021 by stevescountry 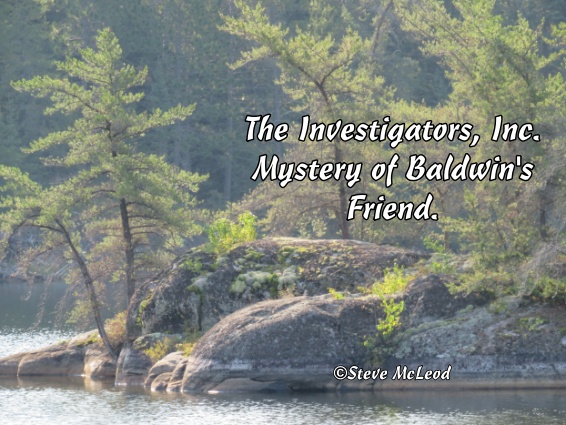 All of this was going on while Jennifer and I had our own problems. We entered the room and quickly closed the door…only to find a young woman at one of the desks. I quickly pulled my gun out. “W, wait, don’t shoot!”, she cried. “Are you supposed to be here?”, I asked her, “we are here doing a security check on this building.” “Um, well, I guess not,” she said with her head down. Jennifer pulled her gun out too and went quickly to the desk. The woman had her hand in her purse. “Take your hand out slowly,” said Jennifer, “and put your purse on the desk.”

She did so, slamming her purse on the desk. Jennifer checked and there was a gun inside. “Okay,” I said, “stand up and come over here.” She started walking toward me. “Okay Muffin,” I said, and “thwock!” I caught the young woman before she hit the floor. “Nice catch Steve”, said Jennifer. “Thanks,” I answered, “what was she doing anyway?” “She was looking at Harold Stanton’s medical file,” said Jennifer, “probably she wanted to make some changes to match what I found at our last stop.” “Which you still haven’t told me about,” I said.

“I told you part of it, but we haven’t had much time to talk,” she answered with a smile. “That’s true,” I answered, “so start filling me in on then and now.” “Okay,” she said, “check your phone, who is that?” “No idea, I have never seen this guy before,” I said. “Right,” she said, “that is Harold Stanton.” “He doesn’t look anything like the Harold Stanton at the research facility,” I added, “and that guy has been there for a little over a year.” “Harold had regular medical visits up until about 14 months ago, then nothing since,” said Jennifer.

Then she looked up the rest of the family and the same thing, nothing for the last 14 months. “But here is the most interesting,” said Jennifer, “little Sonia that we are supposed to look for died just one hour after birth, 8 years ago.” “That doesn’t make sense,” I said, “why the fake kidnapping then? That would just bring someone looking and…” I thought for a moment. “It was deliberately done to get attention, so we would find out what was going on,” I told Jennifer. “Certainly looks that way,” she said.

Then M.C. came running into the room, he had been watching what was going on outside. Meow!=Lots shooting outside. Car come in, then second car. Men in second car get out, shoot lots at first car, shoot driver and take someone away. But too many trees in way, I not able to see good enough, so not know who people are or what cars really look like! “That’s a mouthful, M.C.,” I said, “you and Muffin go back and keep watch out the window and down that other hall. If anyone comes down the hall, you know what to do.” Off they both go.

“Do you think that has something to do with us?”, Jennifer asked. “I don’t know, but let’s finish up and get out of here,” I said. So we got going quickly, and took the young woman with us, obviously she worked for Alex and maybe we can get her to talk. Maybe. They all go out the door and I reset the alarm, giving us 20 seconds to leave before security cameras activate. Jennifer had called our driver to come over to the door, but he wasn’t there by the time I got out so we went to the car. Our driver and other man were dead, so we left the woman by a tree and ran, then I activated the self destruct on our car.

What a noise as it exploded! These are experimental cars and Baldwin didn’t want them falling into the wrong hands, so they all have that self destruct built in. Somehow I think Baldwin knew more than he was telling us. Something else about the cars, when this happens, it registers on our base computer. Meanwhile, back at base…Kat was standing at the computer, having just received the info that Jennifer sent in, when the emergency notice came through, “Car one destroyed”. Kat stared in disbelief, but there it was. She knew it was just the right time we would have gotten back to the car. She sat down…and cried.

Back to us…before activating the self destruct on the car, we did the same with our phones, in case we were captured, and had tossed them into the car. Nothing would be retrievable from the phones. We still had the cats that could send a distress signal, but we needed to get out of that area first, in case someone was still around. We made it to the street, then men and cars surrounded us. I told the cats to run and signal Kat. They took off running fast into the shadows, no one paid any attention to them. They hid behind a tree and signaled Kat, then watched. Jennifer and I knew it was no use fighting so we dropped our guns. That’s all I remember until waking up in a room. Rock yelled, “cars 2 to 5, load up ready for action, we’re heading out!”

25 Comments on “The Investigators, Inc. Mystery Of Baldwin’s Friend. Chapter 8.”