Posted on December 6, 2021 by stevescountry 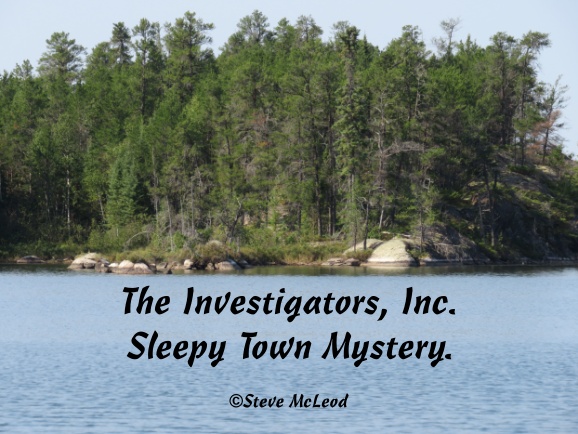 The door was open just enough so Muffin ran in and meowed loudly. That got the man’s attention and I threw myself at the door knocking him backward. Kat then kicked his arm, breaking it at the elbow. That must have hurt. Then she kicked him in the stomach and I threw him against the wall. He was down and I had my gun out pointed at him. I asked him some questions which he never answered. Meanwhile Kat took Kristina back to our room, but Muffin stayed with me.

Meow,meow!=Look in suitcase, bad stuff. It was closed, but Muffin knew what to sniff for. Kat was back now and she kept a gun on the man while I checked out the suitcase. Quite an interesting arsenal he carried with him. “I’ll take this off your hands,” I told him, “you have chosen the wrong people to deal with.” His wallet was sitting on the table by his bed, Muffin brought it over to me. He was posing as a salesman from London and his name was Gordon Saunders, though that likely was not his real name.

I searched him and he had another gun, so I took both of them and his suitcase, then told him to leave this town immediately. He still never said a word, but you could see anger and hate in his eyes. I could see he was going to be trouble for us. But we left him and went back to our room. Kat had picked up Kristina’s suitcase as well. Poor Kristina was crying when we got back. “Does the name Gordon Saunders mean anything?”, I asked Annelie. She stared, “was that him? He is a dangerous man, a hit man worse than Stripe. He is credited with 21 hits, and has never missed.

He is 22 years old and started when he was 17.” “Hmm, I wonder if he was after us?”, I asked. “How do you know about Gordon?”, asked Kristina, “I didn’t even know that. I just knew he was on a job and wanted me for his cover. I was to pretend to be his wife. But we were not at our destination yet, we were supposed to get there tomorrow.” “Well, that answers my question,” I said. Meow.=Man leave and put something by door. M.C. had been listening at our door in case someone else came along. I went to check and it was a nice little box. I pick it up and then let M.C. sniff it.

Meow!=That bomb! Annelie quickly opened the window and I tossed the box outside. There was a large explosion as it hit the ground! “Jennifer and Muffin, let’s go,” I said and we ran down the stairs just as Gordon went out the door. We followed and I yelled at him to stop. He did so we could catch up, then quickly turned to shoot at us, but Jennifer kicked the gun out of his hand. He then produced a large knife when “Thwock!” and he was down. I went to check and the man was dead. The owners, Marik and Beth, had been standing at the door watching.

“I don’t know what to say,” said Marik, “we never have problems here in our town, never.” “You should probably call for an ambulance and the police,” I said, “I know your police officer is on vacation, but there must be another nearby you can call.” “Yes, there is,” he said quietly, “I still do not believe this.” His wife Beth, remained silent during all of this, but something did not seem right. We went back to our room and let the owners take care of things, though I am sure the police will be around to question us. Back at our room Kristina was sitting quietly in a chair.

She looked at me when I came in and started crying again, but softly. “What are you going to do with me?”, she asked. “That is up to you,” I said, “what do you want, to go back to your life or be free of it?” “I want out,” she cried, “I have wanted out for over a year, I even tried to run away, but they found me and beat me and…” She then showed us something, a brand, to show who owned her. That got me angry. “No one owns you Kristina,” I said, “you are a free woman now. You can leave and go wherever you want.” “Or, you can stay with us,” added Kat smiling.

“You would let me stay with you, knowing what I am?”, she asked. “Kristina, it is not ‘what you are’ now, it is ‘who you are’,” I said, “and that’s the way it will be if you choose to stay with us. But we are not forcing you to stay, you can go wherever, like I said, we will even help you with that so you can start a new life anywhere. But you are very welcome to stay with us. I’m sure Kat has filled you in a bit about who we are. But we do require honesty at all times. If you plan to just betray us then I would suggest you leave now. Otherwise, welcome to our team.”