Posted on December 18, 2021 by stevescountry 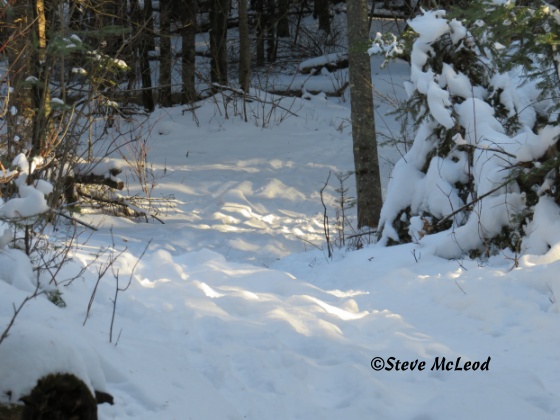 Good morning everyone! Happy Saturday to you all as well! Hard to believe it is only a week until Christmas. And I haven’t even had any Christmas posts yet. Well, we will change that today and I will share another story of my dad and I going out to look for a Christmas tree. We always had real trees back then, and so we went out around the end of November to find a tree. With all the trees we have, it should be an easy thing to do. Not so.

One year we went out, the snow was about 2 feet (60cm) deep. We had snowshoes, but dad never liked wearing them, he always had a problem staying upright while wearing snowshoes. But he put them on and away we went. He was doing fine, I was in the lead which made it easier for dad to follow, at least that was the idea. Because we were beside a lake, the wind would blow the snow off the ice and into the trees along the shore, where we were. So the snow kept getting deeper as we went along. I measured at one spot, it was 4 feet (120cm) deep.

I spotted a nice looking tree to our right and pointed it out to dad. “Looks nice,” he said, “let’s go take a look”. He decided to go first. That didn’t work so good. There were a lot of smaller willows in that area as we headed to a nice group of spruce trees. Actually we wanted a balsam fir, they smell so nice and they don’t lose their needles like spruce. Somehow dad got tangled up in some willows and down he went, face first, into the snow. It always happens. I go over to him and I guess a little snow from my snowshoes dropped on his head and got down his neck.

Dad went into panic mode at that point trying to brush the snow off his head. I tried to help and pulled his head up out of the snow. He claimed I almost pulled his head off. A slight exaggeration. Now, I had to turn dad over to get him out of the snow and that was not easy. Dad was a big man. And the snow was deep. As I finally got him on his side I accidentally kicked a bit of snow on his face. He went into panic mode again. He claimed I covered his whole head. It was just a little snow on his face really. I told him to put his hands on my snowshoes to give him something solid to push on so he could get up.

He did so, but pushed a little too hard and I went falling forward. The look on dad’s face as I fell on him, those eyes of his got so big as I landed right on top of him, my left knee landing on his stomach. He let out this big “OOOOOOOOOOO!” To keep myself from falling face first in the snow like dad did, which would not have been good, I got hold of a willow and pulled causing me to move over and sit down on top of dad. Um, that kind of pushed his head deeper into the snow and he went into panic mode again with arms waving around in the air.

I quickly moved myself over and sat on his stomach. He went, “OOOOOOO!” again. For some reason that got me laughing, loud and long. As I tried getting up I managed to kick a bit of snow on his face again. Poor dad, he just was not having a good day. His face was getting so red from brushing snow off of it so much. “You need to be more careful,” I said. “I need to be by myself,” he said. “But what would happen if this happened to you all by yourself?”, I asked.

“It couldn’t happen if I was by myself,” he answered. Finally he was standing again. “The saw must still be buried in the snow,” I said. Dad just looked at me. “I thought you had the saw,” he said. “No, remember you were going to carry the saw this year because last year I forgot it in the car,” I reminded him. He just looked at me. “We won’t tell mom this, will we?”, he asked. “Not a word,” I answered. We went back to the car. Right by the car there was a real nice tree.

“Too bad we did not see that on the way in,” said dad. “I did see it,” I said, “but you said you wanted to get a tree from back over there.” Dad just looked at me. “Next year we are buying a tree,” he said. “That’s what you said last year,” I reminded him and started laughing again, loud and long. “How do you manage to laugh so much?”, he asked. “Lots of practice,” I said. We used to have a lot of fun together, and dad would laugh at this misadventures too, later. Have a wonderful weekend everyone and God bless!