The Investigators, Inc. Mystery Of The Beginning. Chapter 19. 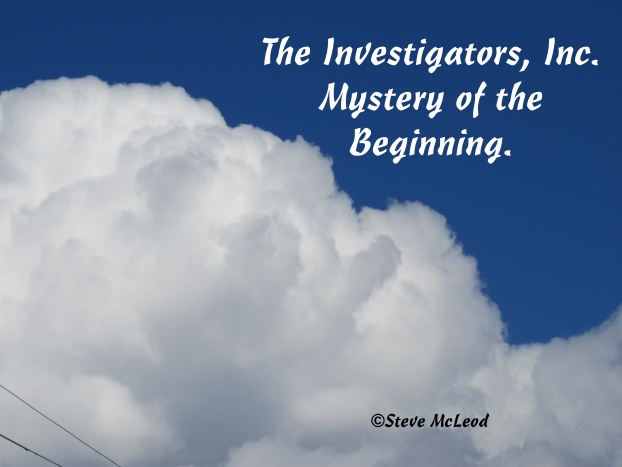 “Yes, I remember that,” I said slowly. “And the gray one that you saw at that old house in your dreams, this is her and her name is Muffin, and her friend is MC.” Carine picks up the cats and puts them on my lap. “Wow,” I said, “I, I’m sorry, but I do not remember any of you, but Muffin does look like the cat in my dreams for sure.” Then a thought hit me. “Are you here to take me away with you?”, I ask, “do I have a wife?” “Yes, you do have a wife, named Kat,” said Annelie softly, “but we did not come here to take you away.

We would like you to come home though, Kat is so worried about you it is making her sick.” “This is too much,” I said, groaning and holding my head. “He keeps getting this pain in his head,” said Carine, “it gets worse and more frequent, he must have been hit on the head. He needs to see a doctor.” “He wasn’t hit on the head,” said Annelie, “he was given a drug, or a combination of drugs really, which is what is doing this to him.”

“Do you know what drugs he was given?”, asked Carine. “We know 3 of them, but one we still do not know,” she answered and told her what the 3 drugs were. “Oh, that is not good”, said Carine and told them what the 4th drug would likely be. “They use this mixture on people so they do not remember their past,” she began, “then they use the people for terrible things. Soon the drug gets so bad for them that they commit suicide. I wondered, when I saw Bernard like this.”

Annelie quickly phoned Chung and told him. “I have not heard of this drug, can we get some?”, he asked. “Yes, I will get some for you,” she said. Then she called someone she knew. “Yeah, I can get you some,” said the man, “how much do ya want?” “Two grams Willy, and I need it like right now,” said Annelie. “That will cost more,” said Willy, “I can have it at your airport by 9am tomorrow. And I want cash, you know how.”

“I will have it for you, but if you send Ken, tell him to behave, or I will break him in two,” said Annelie firmly. “It will be Ken, and two, safety ya know,” said Willy. “Fine, same here,” answered Annelie. Then she had to call Baldwin. “Hi Baldwin, are you alone?” asked Annelie. “Yes, except for Rock, he is bringing me coffee,” said Baldwin. “Good, I need some money, now,” said Annelie. “You have a card, use it,” he said, “you do not need permission for that.”

“Yes, this is different, I need cash for a transaction tomorrow at 9, quite a bit of cash,” she explained, “I found out the drug that was used and some is on the way. It is not the usual transaction, this is kind of, um, secret. But we need it for Steve, and hopefully we’re not too late.” “But we don’t have Steve yet,” he said. “Kristina and I are sitting here talking with Steve right now,” she said calmly. Poor Baldwin, he had just taken a mouthful of coffee and promptly spit it out on hearing the news!

“My ear!”, said Rock. “How, how did you find him?!”, asked Baldwin excitedly. “I will tell you later, but don’t say anything to anyone yet,” Annelie explained, “but bring me the money, I will be staying here tonight, we are at the bakery.” Baldwin did not ask anymore questions, he called the bank ahead so they would have the money ready for him. “Get the car,” Baldwin said to Rock. “It is right out front,” said Rock as he switched from his butler uniform to the chauffeur uniform.

“Bring your bag too, you will be Annelie’s bodyguard tomorrow,” said Baldwin. Soon they were off with a couple other men. “Why does Annelie need a bodyguard boss?”, asked Rock. “Um, she’s picking up an important drug that Chung needs,” said Baldwin, “we know what that fourth drug is and Annelie ordered some.” “Oh, that kind of deal,” said Rock, “if they try to touch Annelie I will break their arms to little pieces!”

Hmm, thought Baldwin, maybe Rock is thinking about Annelie after all. Carine takes the girls into the kitchen area while I play with the cats. “Those drugs, that is not good at all,” she said quietly to the girls, “it has been too long already for Bernard, there is nothing can be done for him.” “We have two doctors working on an antidote,” said Kristina. “Yes,” added Annelie, “and Chung can do amazing things with his herbs that he collects. If anyone can find an antidote, he can.” “I hope so,” said Carine, “otherwise, very soon, his mind will just go crazy.”

38 Comments on “The Investigators, Inc. Mystery Of The Beginning. Chapter 19.”