Posted on April 5, 2022 by stevescountry 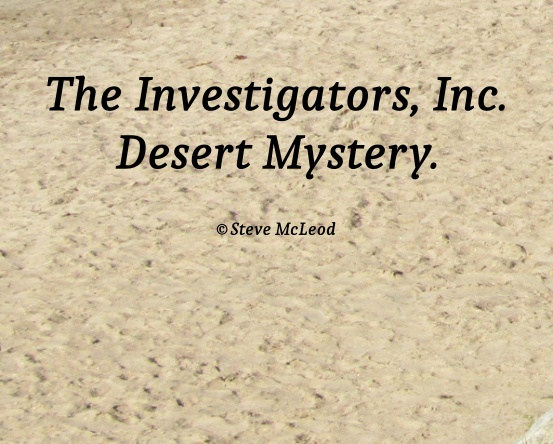 We all talked it over and decided it would be better to wait for nightfall before going into the ruins. But there was nowhere to hide from that sun out here on the desert. And it was hot. We did have some light fabric to set up and make a covering for us to hide under. It was just as hot, but at least the sun didn’t hit us in its full burning capability. Storm came running over to me. Meowr!=Sandstorm come again, must hide. The sun had become blocked which meant a cloud of sand and dust was in the air.

Storm was right, we needed to hide and fast! There was no choice now but to run to the ruins and take our chances there. So we gathered everything together and off we went. Meanwhile… “Mostly women in that group, only 2 men, we kill one of them,” said the man, “those are fighter women, we cannot take them.” “Hmm,” said Charles, “I wonder who these people are and how did they find us?” “Maybe just a coincidence because their plane crashed,” said Henry.

“Perhaps, but how did they find their way here so fast?,” he questioned. “Maybe some black market people found out what we were doing and decided to cash in,” said Henry. “Now you are making more sense,” said Charles, then he said to the man, “use guns this time and finish them off quick.” “My men will not go fight again,” he said, “they want more money, it is more dangerous with this group.” “Okay,” said Charles, “I will double their pay, but get rid of those people. And come, I will give you part of the money now, the rest when we are finished here.”

“That will be good,” said the man. They went back to the main building and he gave the man some money. Then another man came running in, “another sandstorm coming in fast.” “That might be a good thing with those people out in the open, they just might get covered with sand!,” laughed Charles, “get your men under cover but keep your eyes open in case they decide to come here.” “We will do that,” said the man and off he went with the other man.

“That guy makes me more nervous all the time,” said Henry. “Let me worry about him, and the others,” said Charles, “just concentrate on all the money we are going to make from this. We will be as wealthy as Gregory, maybe even wealthier.” “He will not be able to look down on us anymore,” laughed Henry. As he said that the storm hit with all its fury. They shut the door and windows and then went down the hall to see how things were going with Jessica.

“It would help if you gave me some food,” she said, “it is hard to do anything with an empty stomach.” Charles punched her hard in the stomach. “Does it feel more full now?”, he asked and laughed, “now get to work!” He and Henry left, but Henry was soon back and gave Jessica a couple of sandwiches. He never said anything, just turned and left again. Jessica devoured them. It was her first food since breakfast the day before.

She was tired, her stomach ached from that punch and the rest of her body ached from sleeping on that cold stone floor each night. Later Henry came with her supper, hot oatmeal and tea. Plus he dropped a thick wool blanket on the floor beside her and once again left without saying a word. She wondered what had happened to make him change.

Back to the team looking for us…”There is a sandstorm coming in,” said Chung, “we need shelter quickly.” Rock quickly opened the back of his sand quad and pulled out a strong fabric tent which they were able to attach to the quads for solid support and they all sheltered inside. “I hope that Steve and the others have made it to the ruins,” said Carine, “or this sand will bury them.”

Back at the chateau…Baldwin showed up to take Candace into town for some shopping. There were men already at the chateau as Baldwin was having work done to it to make it safer. Annelie wanted to stay and watch her laptop in case there is any news. Baldwin’s driver parked the car in front of the store Candace wanted. She and Baldwin got out and there was a loud shot! A car across the street began to leave but Baldwin pulled his gun and nearly emptied the clip causing the car to crash into another parked car. One man got out and Baldwin quickly shot him. Candace lay on the sidewalk…