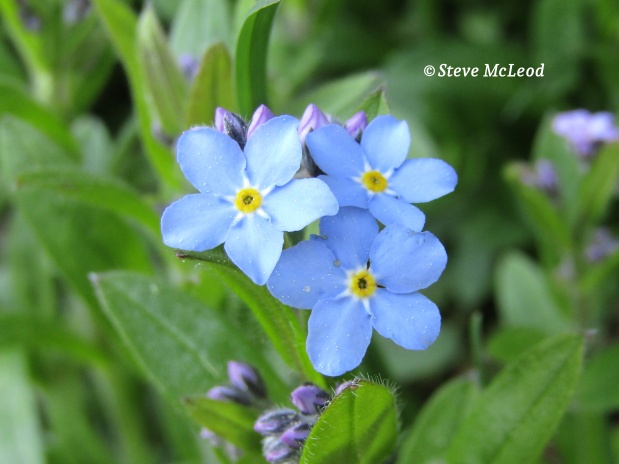 Good morning to everyone on this fine Monday! Time to pull up a chair, get yourself a cup of coffee and join Muffin and I to relax for a few minutes. You probably noticed a change in title for todays post and yes, there will be a slight change on my weekday posts. I am basically moving to posting twice a day now, my morning coffee post and my mystery story.

It turned out to be a beautiful day yesterday, mainly sunny and warmer than the last few days, though still a bit on the chilly side except when sitting in the sun. There was not much wind either which made it feel even nicer. So I spent a bit of time in the afternoon sitting outside on my deck trying for some pictures. In the morning my friendly Baltimore oriole came by again eating some more of his orange. Then a short time later a female showed up!

So I try to go outside carefully and quietly. But as I stepped out the door she flew away. Sigh. No picture there. But in a short time she was back again and this time I did manage to get a couple of pics of her before she flew off. She came back though but this time I did not try for pictures, I did not want to scare her away again or she might decide not to come back at all.

She also came by in the afternoon while I was sitting outside but she stayed quite hidden among the branches so I was unable to get any pics of her. A second male also showed up yesterday as well. So maybe there is a chance that a pair will nest close by this year. That would be so nice and would give more opportunities for pics too. Plus the female rose-breasted grosbeak was around and I was able to get a couple of nice pics of her as well, though not quite in the sun.

But they turned out very nice anyway so I was super happy to get the females of both these species! So that is 2 more birds checked off my list now, (insert Steve jumping around the room with joy!). Now there is a female red-winged blackbird around so hopefully I can get a pic of her too. I actually have quite a few birds on my list yet, but I am off to a great start this year anyway! And now it is Grover’s turn to provide a bit of humor!

(We are having an election in our province next month, so…)

“Well,” the little old lady finally admitted to the persistent politician, “you are my second choice.”

“Oh,” she responded casually, “anybody else who is running.”

A sidewalk interviewer asked a retired man what he thought about the two candidates for an election.

“When I look at them,” the retired man replied, “I am thankful only one of them can get elected.”

I hope you all have a wonderful, sunny Monday and God bless!