The Investigators, Inc. Ghost Town Mystery. Chapter 16. Getting Away. 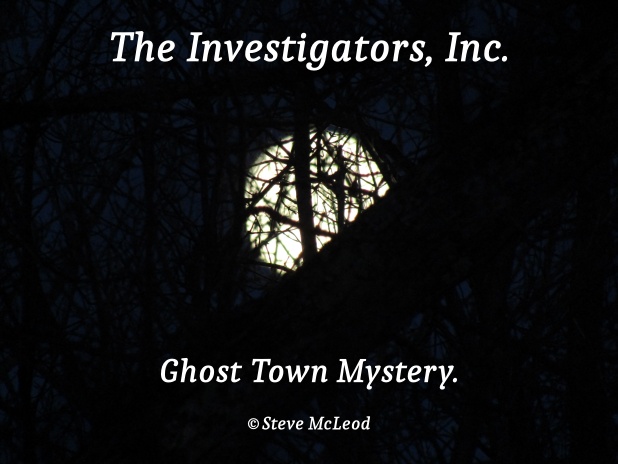 As the 2 men opened the back of the covered truck they each received a hard kick to their head and fell to the ground. “What is going on over there?”, yelled Ralf. “Looks like you are in for a big surprise you ugly old coot,” laughed Mel. “That is all I take from you!”, yelled Ralf to Mel and he pointed his gun at her. But suddenly he screamed, raising his arms and he shot in the air. “I will take that gun,” said a voice as a gun was placed against Ralf’s head. Ralf let go of his gun.

Then “Thwock!” “Thwock!” and more fighting, then “Thwock!”, “Thwock!”. “Okay Storm,” I said, “you can let go now before Ralf screams any more.” Storm dropped off Ralf’s back where he had dug in his claws nice and deep. “You!”, exclaimed Mel, “but how? We all saw that chopper explode and no one got out of it, how?” “Quite simple really,” I said, “we were not on the helicopter.” “But we saw you get on, you never got off again,” she said, still very puzzled.

“Well, oddly enough there is a tunnel from the old store and it opens onto that field right over there. We marked the spot and they landed the helicopter right over it. Fortunately the dried grass was long enough to hide the underside of the helicopter and the ground and grasses had grown solid over the wood door to the tunnel. We opened that tunnel door and the bottom of the helicopter so we could all escape. Then the pilot flew the helicopter by remote just over the trees, then he detonated the bomb on board.

Very lifelike dummies were used for each of us inside that would burn just right to look like real victims.” “Your team sure acted like it was real enough,” said Mel shaking her head. “That is because they did not know what was going on, except for Kat,” I explained, “we had to do it to expose our traitor since we did not know who it was. But we found out that Ax, that is Axelina, was working with Ralf here to get that treasure, and to get rid of us as well.”

“How did you know it wasn’t one of those 3?”, asked Ralf. “Sometimes a person just knows,” I said smiling, “and my cats were a big help, though it was tough on Storm, but he held up strong.” Meowr.=Me always know traitor not my human Angel, she too nice for traitor. “I agree with you storm,” said Jenny. “I can’t believe you actually act like those things can talk,” growled Ralf.

Meowr.=Let me scratch back again. “I think he has had enough of back scratching for today Storm,” said Galyna as she picked him up to cuddle him. “How many did you get Muffin?”, I asked. Meow,meow=Me get two, pop, pop. Meow.=Me get two too, also pop, pop. “Now to track down John,” I said. However, it was too late for that. John had kept an escape plan, which was a small helicopter, a little ways from the old town, and he was soon flying away once again.

But we got Mel and Ralf and took them to the old jail in town and locked them up until the police could get there. Maggie, Val, Jill and 2 of John’s men were dead. John took his friend Bill away with him. I drove the bus back to the house and we waited for the police to arrive.

Meanwhile back at the chateau… After revealing that Ax was the traitor, then Baldwin explained to everyone that we were still alive and why we had to use a bit of deception to catch our traitor quickly. He apologized to everyone, but the girls and Rock were just very relieved to know that we were still okay. Soon the police were up to take Ax away in a well guarded police van. “They are not taking any chances with her,” said Kat. “That is a good thing,” said Baldwin.

“Yes,” agreed Jake, “especially after she swore to get each of you. She is a very dangerous woman.” “People used to say that about me,” said Kat, “and it is still true.” “I can believe that too,” said Jake. Later we discovered that the original police officers had been overpowered and locked up and it was actually friends of Ax who came to pick her up. So she is still out there somewhere and I am sure we will meet her again at some point.

When the police arrived at the ghost town to pick up Ralf and Mel, they were both gone as well. It seems there was an old escape tunnel from each of those two cells they were locked in, and Mel knew about it. So they had a nice 4 hour head start in their escape and neither were ever found. As for the treasure, most of it came from a robbery of a bank more than a 125 years ago.

The company that owned it, and the bank, are long since lost in history so the treasure becomes property of the state. But they actually shared it with our team for recovering it, so some of that gold and part of the gems were given to us. Not bad really. One of the few times we actually got paid for our services. Flying back home with Muffin curled up on my lap I wondered what our next case would be.

The End, but a new case will begin on Monday.

22 Comments on “The Investigators, Inc. Ghost Town Mystery. Chapter 16. Getting Away.”