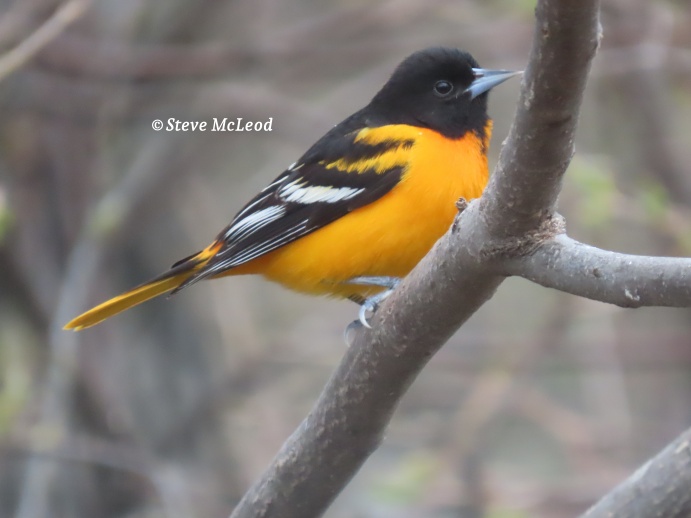 Good morning everyone on this beautiful, sunny Tuesday! The weather is actually warming up finally and the sun is supposed to continue shining for several days at least and that is great. So I had plans to walk down to the river a couple of times this week. However, something came along to perhaps interfere with those plans. It is a bear.

Yesterday after coming home from shopping I noticed that my bear warning system had been triggered. Was he still on the deck or not? I told my friend to wait until I checked it out. As I got closer I saw this big black head stick out. He was still there. Then he came running off the deck, which unfortunately was in the same direction I was standing.

But he turned and ran off around back and out of the yard. That was much too close. He had also broken one of the poles that holds feeders. I could not fix the pole but I had room to hang the hummingbird feeder on the other pole, plus the chickadee feeder. The bear came back in the afternoon and went after the feeders. I tried to scare him away, but he would have none of that.

Instead he turned to me, growled and snorted. That was too much. This is my deck and I plan to use it. He can go eat somewhere else. So out came my bear spray. I just gave him a short blast to see what would happen. He ran off quite fast. But he had already destroyed my two hanging feeders and broken the hummingbird feeder. The stores do not have any of those feeders left now, too late in the season. So I am attempting to fix it and will hang it back up shortly to see if my repair job worked.

Anyway, the bear was back after an hour but there was nothing for him. I heard him groaning like he was rather upset there was no more food. He returned in about half an hour and checked again. Still no food so he left. He did come back again just as it was getting dark, but no food so he did not stay around long. He did move the step outside my door, picked it up with one paw and tossed it aside. That step is quite big.

So is the bear. He is about 5 and a half feet long from nose to rump and stands 2 and a half feet tall. It is early summer so he is still thin, by fall he could be a big bear. Having had a much better look at him now and checking size charts, he is likely 250 to 300 pounds. Not overly large, but not small either. And he is not afraid of people, that part makes him more dangerous.

So, I have to stop feeding birds and that means no more opportunity for pics out here. My only hope now is walking to the river. However, I am a bit nervous about doing that now. Sigh. Lock the doors, stay inside all summer. Hmm, but if I did that then my blogging would come to an end. Sigh. Here are some pics of my new “buddy”. And a more cheerful friend that will now be gone. Have a great day everyone and God bless!

58 Comments on “Coffee, Chatting and Critters. #3”