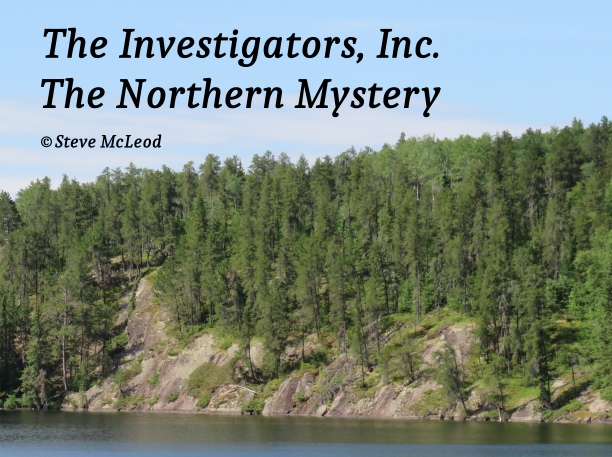 Well, here we are, nicely rested from our last case, everyone is feeling great and we are ready for another case. Most are ready anyway. I am not so sure about Muffin, MC and Storm. They are busy figuring out their new play structure. Baldwin promised to make them anything they wanted instead of buying something. That way it would be unique, just for them.

They were wildly enthusiastic about this idea but I think Baldwin is having second thoughts. They keep coming up with new ideas and his planner is going crazy making up new drawings all the time. But the cats are having fun and it is certainly keeping them occupied. But that means they are not thinking about going on another case right now. So maybe we will have to leave them at home this time.

But we did get this request for help from a couple in Canada. It seems their grandparents left a rather large inheritance for anyone in the family that could figure out the “riddle” for finding this inheritance. I think we had something like this one other time. But this one seems a bit different since the note specifically says there will be traveling necessary to find this treasure. Everyone in the family has had a try at locating it but has failed, so now it is the turn of this couple.

Their names are Frank and Janice McCreary. Muffin comes over after I finish reading the letter. Meow,meow.=It handwritten letter, that mean they have no money so we not get paid. Say no. We not pack. Off she goes again. “What is all that?”, asked Sigurbjorn. “Oh, some of you do not know about this,” I said, “when we first started as a PI business, every time we had a handwritten letter from someone we never did get paid.

That meant we did not have much money to work with until our next case came along, which might be a while.” Muffin reappears in the room. Meow,meow!=It mean we starve for maybe a month because we not get paid. And we not have car so we have to walk everywhere. “Hey now, I did the walking, you sat on my shoulder,” I reminded her. Meow,meow.=And shoulder boney, not comfy at all. “You did not complain at the time,” I said. Meow,meow.=Well, better than sore feetsies.

Off she goes again. Everyone chuckles. “Well, I guess we could go talk with the people and see if it might be worthwhile,” said Kat, “at least it seems like something a bit easier for a change.” “And it might be fun too,” said Galyna, “a treasure hunt!” Everyone agreed. So we decided to go and talk with the people anyway, easy to tell just from a talk whether it will be worth for us to get involved in a simple treasure hunt. So Kat, Sigurbjorn, Kristina, Galyna and I were the ones to go and talk.

The cats were happy to sit this part out at home and plan their play structure. We were soon flying across the Atlantic Ocean all the way to the Yukon Territory of Canada, site of a major gold rush in the distant past. So perhaps this treasure is gold that we would be after. We phoned home after arrival in Canada, as our new rules outline, to keep in touch regularly with our head office, which is Baldwin’s office. Then we phoned again after arriving in Dawson City, or more officially, the City of Dawson.

This was the major center during the Klondike Gold Rush from about 1896 to 1899. Dawson city was established in 1896 at the beginning of the gold rush. It quickly reached a population of about 17,000 at the time though now it is only about 1,300. A day after our arrival in Dawson, Frank McCreary called our office asking where we were.

Baldwin nearly choked on his coffee when he heard that question! He called the team together immediately to let them know we had disappeared. He had tried to call us but without success. Poor Muffin was so upset that she did not go along with us! “Rock, you will take the team over there to find out what happened to them,” he began, “and check out the McCreary couple, just because he called does not mean he is innocent.”

Jennifer, Carine, Angel and Storm stayed home with Annelie. Rock took Rossana, Sovia, Tracy, Benson, Muffin and MC, plus a new team member, Susanna. Soon they were in the air, sleeping most of the way so they would be well rested upon arrival and ready to look for us…

224 Comments on “The Investigators, Inc. The Northern Mystery. Chapter 1. Yukon.”