The Investigators, Inc. The Case That Is Not. Chapter 4. Jenny. 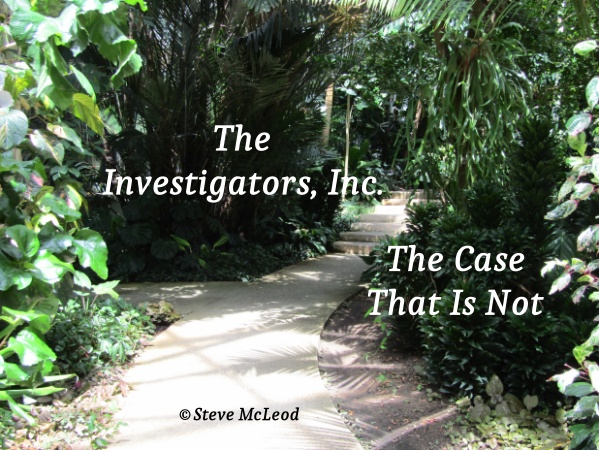 “That just cannot be!” said Tracy, “there must be a mistake. How could Jenny organize all of this without anyone knowing?” “That is true,” said Annelie, “all phone calls must be sent through myself and Mr. B., unless she had her own phone, but that would be difficult too.” “Could you have made a mistake translating her message?” asked Baldwin.

“I have memorized her code,” said Annelie, “but I will go check the book again. There is one thing I do not recognize, the letter R. It says the woman is Jenny, then there is an R, then PD. The PD means positive identification, but I do not remember what the R means. Also, did you notice anything different with this call Mr. B?” “No, not anything,” he said.

Meanwhile, back to us… The night passed quickly and uneventful, which was nice. In the morning we were told that the yacht would soon be leaving to take everyone back to our friends, whom she had already contacted apparently. Then a group of men came aboard to take me off. “Wait Steve,” said Jenny, “you need your shot today.”

“No,” said the woman’s voice, “you are not allowed to give him a needle or pills, if you do then all of you will die right now.” “But he needs this,” replied Jenny. “She is right,” I said, “it is very important.” “Sorry dear Steve,” she said, “but you will have to do without for now.” Jenny was going to protest some more, but I stopped her. “I will be okay Jenny,” I said, “I want all of you to leave and get safely back home.

Muffin, it is up to you now to look after Jenny for me. Will you do that?” She gave me a big hug, and tears fell down her little cheeks. Meow,meow.=Me look after our Jenny real good. Please, come back to us. I gave her to Jenny and the two of them hugged. I then went with the men that came for me. Once off the boat we went through a tunnel which opened on the other side of the island. There was another yacht waiting there for us and once on board two men held me while a third gave me a needle.

I was out very quickly. The others were soon backed out of the cave and were on their way to a meeting spot that Jenny had told to Baldwin. It was a long trip, and the yacht was driven somehow, like before, the Captain being unable to do anything. Finally they arrived at the meeting spot, at precisely 11am. Mandar and the others were not far away and soon joined the yacht.

Mandar did not trust things, and everyone was moved quickly onto the yacht he was on, and they quickly moved away from the area. At ten minutes after 11 the other yacht exploded in a giant fireball! “She certainly did not give us much time,” said Jenny. “Perhaps she was watching,” said Mandar. Meow!=Chop chop close! Sure enough a helicopter circled in the distance and then left. “She was watching, or at least someone was,” said Sigurbjorn.

“Well, she may have wanted to make sure everyone was safely off first,” said Mandar, “then detonated it by remote.” “Why would she care?” asked Jenny. “If she wants Steve to cooperate with something, he may want proof you all made it to safety,” answered Mandar. He put his arm around her. “Do not worry, my dear Jenny,” he said, “we will find him and bring him back. All my resources will be used to look for him. I promise you.”

She looked at Mandar and began crying. Galyna came over and took Jenny aside privately. Mandar called Baldwin to let him know everyone was safe, except for me. Rock was angry, but mostly he was frustrated. “How do you look for someone you do not know,” he began, “and do not know what she even looks like?”

Meow,meow!=That not hard, me know who is woman! Woman is human Jenny! Poor Mandar, he had just taken a sip of coffee when Muffin said that, and he spit it out all over Rock. Rock looked at Mandar and shook his head. “You and Mr. B are so much alike sometimes,” he said.

Meanwhile, back to me… I woke up in a nice bedroom and sat up. The window had very sturdy looking iron bars on it, no doubt to keep me inside. “Nice to see you awake at last,” said Jenny. I looked over at the door, Jenny was standing there. “You do not look surprised to see me,” she said. “No, I knew it was you, though it took a while to figure it out,” I said.

57 Comments on “The Investigators, Inc. The Case That Is Not. Chapter 4. Jenny.”