Posted on January 9, 2020 by stevescountry 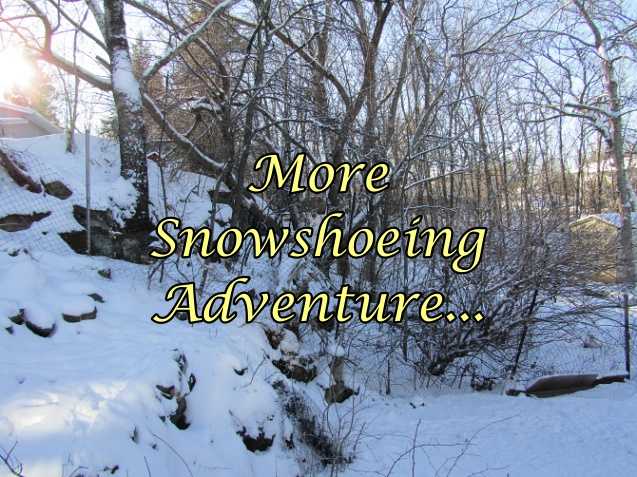 Hi everyone!  I hope your day is going well.  Much milder weather here today with the temp making it up to 14F (-10C).  It is cloudy with just some snow flurries now and then. The bird feeders have been active today which was nice, and being mild allowed me to go out and get some pictures today.  Without freezing solid.  Which is important.  At least I think so anyway.  Especially since I like to have bare hands when using my camera and the last couple days have just been too cold for that.  So it was nice having the mild weather for that purpose.  I thought it might be a good day to toss in another snowshoeing adventure.  I know it should be another “touring my town” post today, but I didn’t have it quite ready, I needed to get the right pics together.  Sigh.  Next week it will be back.

It was another January day, the temp was -5F, so not so bad, and it was cloudy.  A good day for snowshoeing, I thought.  This time I was smart and let someone know where I was going and about how long I would be gone.  I had a lot of snowshoe trails by that time and they were nice and hard, so it’s like walking on a sidewalk.  But I wanted to extend one of the trails so off I went carrying my snowshoes for the first part.  I came to where the trail split, one heading south, one north.  I was supposed to be going south.  But instead I decided to head north.

Why?  There was some wolf tracks along that trail that looked quite fresh.  That naturally caught my interest.  So much for letting someone know where I was going.  Sigh.  I continued along that trail for some time.  The wolf tracks kept going.  But I stopped at one spot and decided it would be nice to make a new trail heading east.  So I strapped on my snowshoes and was set to go when a couple of gray jays showed up looking for some food.  This time I had brought some food just in case.  Not for me, but for any critters I might see along the way.  I put some pieces of bread on my hand and they came down right away and helped themselves.  Then off they flew, chirping their thanks.  Gray jays always do that when they get some food.

The snow was deep again that year.  Even with snowshoes a person still sinks a bit.  I came to a nice grove of spruce and balsam.  I stopped and listened.  Sure enough, there was some Boreal chickadees among those trees.  That’s exactly where they will be found. They are always such a treat to see, they are not as common as the black capped chickadees.  I counted 8 of them, plus a nuthatch.  I watched for a bit then continued my walk.  If I had been smart I would have turned back at that point.  But I decided to continue a bit further.  I soon came to a spot at the top of a hill.  It was a rather steep sloping hill going down about 100 feet.  Too steep to walk down.  Hmm, I wonder if I could sort of ski down?  Why not?  I looked down that hill and decided it really didn’t look that bad, so skiing down on my snowshoes should work rather well.  Off I went.  It was fun.  Until….

Oops, ran out of time…

Guess we will end it there for today but the conclusion will come tomorrow.  I hope you all have a wonderful day and God bless!