Posted on April 8, 2020 by stevescountry 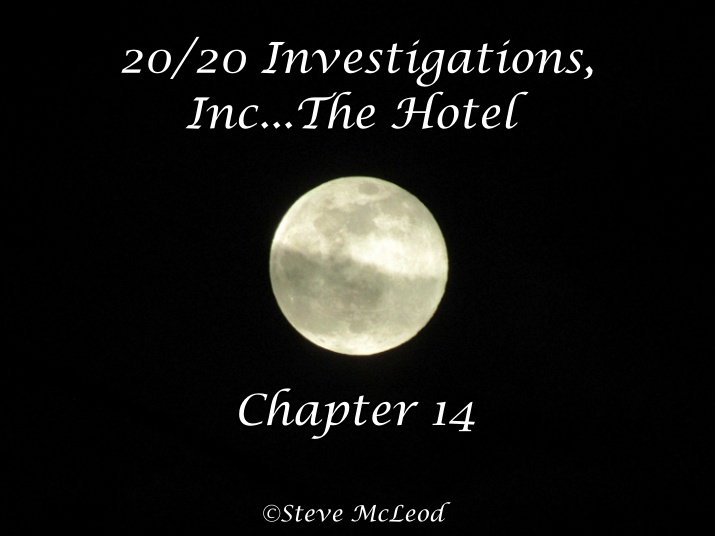 (If you missed any of the previous chapters or stories, they can be found on my home page under 20/20 Investigations, Inc.)

Welcome everyone, grab a cup of coffee and read on for the conclusion of our story!

They were all well illuminated by the fire as they stood in the yard.  I told Muffin to move further over into the dark where she would be hard to see, and then we wouldn’t be too close to each other.  I knew this would likely be dangerous since Roger was a police officer and would know how to use that gun of his.  It’s a good thing I had an extra gun in my backpack, they had taken my other one.  Bill would have a gun too, perhaps Trish as well.  So we would need to be very careful.  Once Muffin was in place I stood up beside Jessica’s truck and called out to Bill.  Roger pulled his gun out even faster than I thought he would and shot once.  I knew he would be wearing a protective vest so I aimed for his head and fired.  He fell to the ground.  By then Bill had his shotgun aimed at me and fired.  The sudden shock of pain caused me to drop my gun.

This time it was Muffin’s turn and she got Bill right on the side of the head.  He dropped to his knees but managed to aim once more in my direction.  But Muffin hit him a second time, a direct hit to the side of his head again and he fell over.  Trish called out, please don’t shoot, I don’t have a gun!  By this time Jessica had awakened and heard the gunfire so she had come around to where I was.  When she heard Trish say that she ran over and tackled her to the ground.  Just then there was a loud roar as the hotel collapsed into a burning heap.  The heat from the fire seemed to really increase at that point, I could feel it even where I was over by the truck, a good distance from the hotel.  Muffin came running over to me.  Meow, meow?=You hurt, bleeding bad, what I can do?  Call Jessica, Muffin.

Muffin called out with a loud, pitiful sounding yowl!  Jessica came running over, literally dragging Trish along the ground.  I just can’t believe what is happening, she added.  Oh, grow up, little sis!  Bill had this planned with Roger before you 2 even got married.  A foolproof plan he told us, right.  Jessica looked angrily at Trish.  It’s true, I said, all Bill wanted was the money he would get, I’m sure of that.  Meow, meow!=I heard them talk, I know whole story!  Meow, meow, meow!  Muffin says that Bill did have it planned with Roger.  He would fake his death so you would get that 5 million dollars.  Meow, meow.  He also knew you wouldn’t change your joint account with him, so he could take the money and give it to Roger.

Meow, meow.  Then you would die in a fire in this hotel and Trish would collect the 5 million dollar insurance from you.  Meow, meow.  Bill had made Trish the beneficiary.  Meow, meow.  Trish and Roger would get 4 million and Bill would get 6 million dollars, and they would all live happily ever after.  So the plan was supposed to go anyway.  Yeah, said Trish, he kept telling us how this couldn’t fail, nothing would get in the way.  Then you had to hire this idiot, and his fur ball friend, to help you.  Grrrrrr, growled Muffin.  Yeah, and don’t forget, that fur ball killed your precious Bill.  Then she just sat there and laughed.  Muffin went over to Jessica with her head down and tail dragging.  Meow, meow?=You hate Muffin for killing ghost Bill?  Jessica picked her up and gave her a big hug.  No, I don’t hate you Muffin, I love you.  And hey, you saved my life!

Meow, meow!=Jessica understood me!  We take Jessica home now?  No, Muffin.  Wow, such a big sigh, said Jessica.  What did she say?  Just personal talk.  And, although you lost everything here, if you look in those tins over by my backpack you will see they are filled with small gold bars.  That should help you get started over again.  You mean there really was a treasure?  Yes, hidden in one of the fireplaces.  Right then the police from Windon came, along with an ambulance.  I had called them right after getting Jessica safely out.  Well, only a day in the hospital and then back home again.  Feels good to be back home, doesn’t it Muffin?  Meow, meow.=Better if Jessica here, she good cook.  Hey, I can cook.  Meow, meow=I said Jessica GOOD cook.  Ha, ha, very funny.  Now we just need to wait for our next case, I wonder where it will take us?

And a new case will be coming, starting on Monday!  I hope you will once again join us for another adventure!