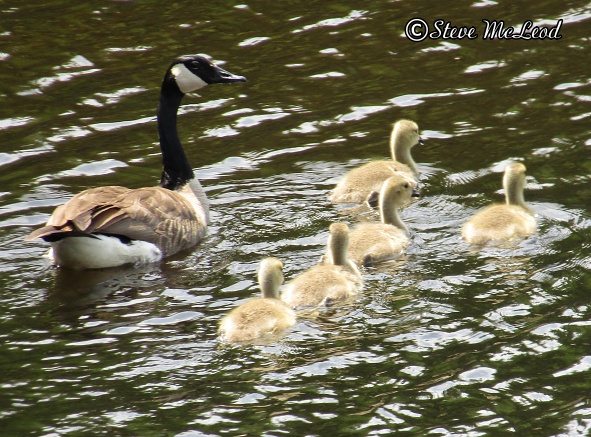 Good morning! It’s a beautiful, sunny morning and just a bit cooler than the last few mornings, but so nice and fresh sitting here on the deck bright and early, waiting for the sun to rise. The phoebe is calling out his name, the loon is flying overhead and laughing so joyfully. The air is still, not a flutter among the leaves except when a bird moves. The bees will soon be busy at all the raspberry flowers once again, there are a lot of bees around these days. And so many other insects as well. I have been getting quite a collection of different insect pictures lately. But identifying them is no easy matter. Online identification sites are sometimes more frustrating than helpful. Hard to beat a good old fashioned book for identification of things sometimes. Oh well.

Last evening a chipmunk showed up for peanuts that I had just put outside and right then the squirrel showed up and the chase was on! The chase just began when a second chipmunk showed up and joined in the chase! The 3 of them were running all around my little container garden and ended with one chipmunk chasing the squirrel right off the deck. While he did that the first chipmunk filled up with peanuts and left just as the second chipmunk returned and he filled up and left fast just as the squirrel came back. Poor squirrel, he looked somewhat confused, probably saying to himself, “I think something went wrong here”. He just sat there looking around, then finally grabbed a peanut and off he went.

Well, more birds for us to enjoy this morning, although we have seen both birds before, but not so close as this time. The picture at the top of the post is a family of Canada geese down at the river. There are several families of geese down there now. Then in the picture above is one of the white pelicans which came closer than ever before. The only way he could come any closer would be to climb up on the rock with me. Well, I hope you all have a most wonderful day and God bless!