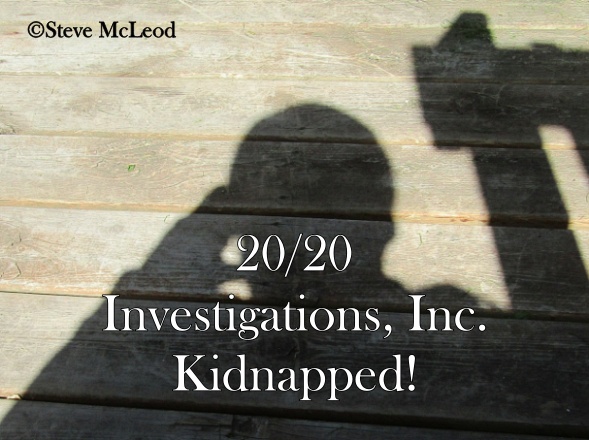 I quickly run into the bedroom and back out again. By this time men had come in the back and front doors and down the hall from the garage door! We were clearly outnumbered and there standing in the living room was Katharina. Okay, said Katharina, come out here cats or your human friend there is going to die. They both come out slowly. Do what they say Muffin and Mr. Cat. Meow?=Without fight, we give up? Yes, I said, sometimes that’s the best way. Both cats looked at me with sad eyes, they didn’t like the idea of giving up without a fight, but we certainly couldn’t fight this one and win. They tie up the two cats together with some small rope they had found in the garage, then they tied Karin and I with duct tape, very tightly so there was no way we could move at all.

Now, said Katharina, where are the papers? In the bedroom behind the dresser, I said. One of the men went and retrieved the briefcase. Katharina looked at them, yes, they are all here, not a very imaginative hiding place. I didn’t have a lot of time to think about it, I said. Why are you working with Karl anyway?, asked Karin. When mom and I first started working with him we didn’t know what was going on, but the money was good, so good that even when we found out we really didn’t care by that time. And what about Anna? She was no friend of mine, said Katharina, but she thought about getting involved with us and I told her this is not for amateurs. She and two of her friends were found dead in her flat this morning. I told you the same thing at the beginning Mr. PI, this is no place for amateurs. You should have listened and gone back home.

We’re willing to do that now if you let us go, I said. She just laughed. You really are amateurs, now you know enough to cause us some headaches, though not enough to stop us, but this will relieve the headaches before they start. Where’s your friend Sofia?, I ask. She did her part, poor girl, they will find her body soon, she overdosed and died. With a little help from someone no doubt, I added. Katharina laughed again. Oh, take his phone, she told one of the guys, he won’t need it anymore. He took it and tossed it in the air. Katharina shot it to pieces. Hmm, she’s a good shot, must remember that, well, guess I won’t have to remember for long. Everyone leaves and then Katharina pushes a button on the wall and I heard a familiar sound upstairs. Fire!

In just a few minutes, said Katharina, this house will be engulfed in flames. Hope you can stand the heat, she said as she left laughing. Now what?, asked Karin. We escape, I said, Mr. Cat is already at work freeing Muffin and himself. Meow!=Have sharp teeth, chew rope fast! And he kept at it, but, will he manage to get the rope off them quickly enough? The fire was really roaring by the time he cut through the rope and they were free! Bits of the ceiling were starting to drop and one wall of the living room was aflame. Muffin, that little pocket on my backpack! She went over and opened it and took out a small, very sharp knife and brought it over. Do you remember what to do? Meow, meow!=Yep, I go fast too! She got it open and starting cutting the tape on my hands and she did cut it fast!

I then took the knife and freed Karin and I while the ceiling was falling in flames around us. Nearly every room on the main floor was now on fire including parts of the hallway but we ran down there and into the garage. I opened the door and started the car while the cats ran outside to see if anyone was out there watching. I figured Katharina was smart enough to leave someone behind just in case we did escape. There were two men out there by a car alright, suddenly, thwock! And one of them dropped to the ground. The other one stood up to see better and thwock! He also dropped like a stone.

The cats jumped in the window as we drove up. Meow, meow!=Two men now sleeping! Good going you two, don’t know what I would do without you! We got down to the road and turned back the way we came. Why are we going back?, asked Karin. That could be dangerous, they will likely be watching for us when those men don’t call them. That’s quite possible, I said, but it’s necessary. Both cats were sitting with Karin and had such sad looks on their little faces. What’s wrong you two? Meow.=We had to give up, we lose. Meow, meow.=Yes, not feel good to give up, only amateurs give up. But we’re not amateurs, I said, we have this case won, not lost. Just listen now….