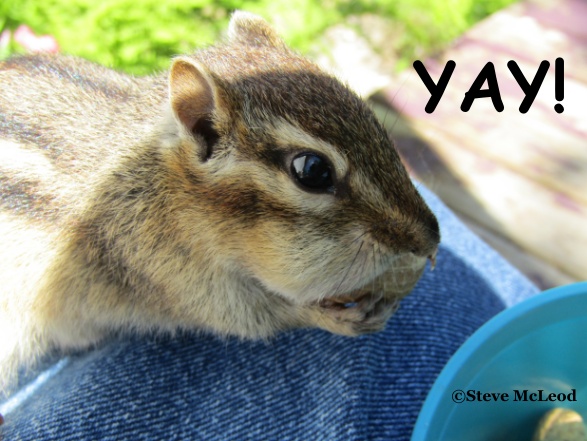 Hi everyone and welcome back! It’s only been less than a month since the chipmunks have gone to bed for the winter. But Jasper and I are missing them already. Poor Jasper has had to start a new exercise program to help keep him in shape. That’s why he was running through the trees and stopping to stretch now and then. He prefers chasing the chipmunks. He even misses all the times he fell off the deck. Great way to strengthen the stomach muscles apparently. Providing I’m understanding his chips and chirps correctly.

Jasper sits there looking at the edge of the deck, eating his peanut, then he looks at me and gives a little ‘chip’, then looks at the edge of the deck again. Forget it, I said, I’m not jumping off the deck so you can follow after me like you’re chasing a chipmunk. One day this past summer I was watching out the door and Jasper went in the box to get his peanut. Pocket, one of the chipmunks, went in right behind Jasper. I’m not quite sure if Pocket thought Jasper was another chipmunk, or he was just getting overly brave, but he touched (or perhaps bit) Jasper’s tail.

Poor Jasper. He started running around in circles in that box, and right upside down, several times. Pocket disappeared behind a flower pot. Finally Jasper emerged looking around, then he walked slowly around the box. He didn’t see anything so he went back inside, grabbed a peanut and ran out of there as fast as he could! That had me laughing for quite awhile. Pocket then came and got his peanuts. He was probably laughing too.

One day I was outside working on a project. I had filled my pockets with peanuts because I knew the chipmunks would show up once they heard me out there. Sure enough, didn’t take long, maybe 2 minutes and there was 5 of them running around, chasing each other, climbing over all my stuff. And climbing all over me too. They would run up my leg, sit on my shoulders, run down my arm, dig into my pockets, fill up and leave. But they would be back. Even the noise of the tools didn’t bother them a bit, after all, peanuts are involved here, who cares about a little noise?

Pocket would stand on his hind legs reaching up as high as he could. Skamper outdid him though, he stood on my drill, then stretched up as high as possible, right up on his toes, trying to get my attention. One of them sniffing my phone while I’m trying to get a picture, can’t remember which one did that. But it was so cute and nice having these little critters, so used to being around me that they were not the least bit afraid. I think they really did enjoy crawling and sitting on me. Skamper held my finger while I picked him up and put him by my pocket so he could get his peanuts. For some reason he always had trouble climbing on my jeans, the others never did, oops, except for Pocket. Finally I said, ‘Okay guys, time for a break.’ That’s the top featured image. Jasper and I miss our chipmunks. Have a wonderful day everyone and God bless!

Steve and Muffin. (Yes, she misses the chipmunks too, but she’ll write about that another time).