Posted on November 29, 2020 by stevescountry 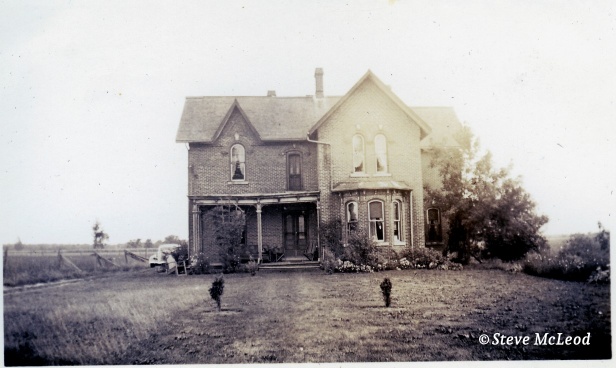 “I don’t think you will get very far with these diamonds,” I told them. “We’ll get far enough,” sneered Chantelle. “Perhaps you should look over by the barn,” I suggested to them. “Hello my dear,” said Charlie, “I’m afraid you won’t get anywhere with my diamonds.” There was Charlie with his big shotgun and two of his friends also holding guns. “Now, all of you toss your guns in that hole,” yelled Charlie as they started walking toward us, “that includes you Steve, I know you always carry a gun.” I toss my gun in the hole, so did the other Lena. “Never, you greedy old man!”, yelled Chantelle and pointed her rifle at Charlie and fired off one shot. It hit Charlie which caused his shot to go in the air, not hurting anyone. But Charlie was still alive, on his knees, groaning and holding his shoulder.

Then…Thwock!…Thwock!, and Charlie’s two friends dropped to the ground. That got Chantelle and the other Lena to look over that way. Right then Lena handed me the gun I had given her to carry. “Okay Chantelle, drop the rifle now,” I called out to her. She looked at me but I guess she realized it was no use and she tossed her rifle in the hole. Right then Muffin and Mr. Cat showed up next to Lena and I. Meow, meow!=We hear voices and knew you would need help. Meow!=Yep, we use slingshots from inside barn, we nice and close. “You two came to our rescue at just the right time,” I said, petting and rubbing them. They always enjoy when I do that. Lena picked up both of them, hugging and kissing them. “You two are the most beautiful PI cats in the whole world,” she quietly said to them with tears in her eyes.

Meow.=Aww, human Steve bestest PI, we not find treasure without him, and he keep us all safe with his plan. Meow, meow!=Yep, that true! We all walk down to where Charlie was still on is knees and I toss the shotgun aside. Then we could hear sirens at the farmhouse and soon police came running through the trees. “How did the police find us?”, asked the other Lena. “Yes,” said Charlie, “how could they?” “Simple, Charlie,” I explained, “your jamming device only was good enough around the farm, but over here we are far enough away that we can get a good signal.” “You never were very smart,” Chantelle said to Charlie. “But I never saw you phone for the police,” said Lena. “I didn’t, Muffin did that with her special collar,” I said, “I’ll show you how it works later.”

Meow, meow.=Yep, me did it with collar caller. We all laugh. Well, except for Charlie, Chantelle and the other Lena, they certainly didn’t look too happy, and they couldn’t understand what Muffin said anyway, not even the other Lena. Once back at the farm I showed the police where they could find the rest of Charlies friends. There was a trap door in the barn that lead to an old bomb shelter. There were two more men down there that the police quickly brought out. It seems they were making counterfeit money down there in different currencies from many countries. From this the police were able to find two other small groups in other locations that were also involved in other illegal activities. Lena did very well with the sale of those diamonds, plus the sale of the farm. Both Charlie and his wife died of heart attacks before they ever made it to prison. The other Lena, which actually was her real name, did get some prison time for her part in the affair. We had already been paid for the case by Charlie but Lena gave us a bonus anyway.

Muffin and Mr. Cat were happy with that, we were able to get another part of their play structure which made them very happy, plus we moved to a larger place. After all, I needed a place to sleep! Meow.=Human Steve not look very happy, he miss human Lena. Meow, meow.=Yep, too bad she not come home with us. Oh, look, he not wearing shoes or slippers. Meow.=I know what you think, maybe it work to get his mind off Lena. Meow, meow.=Yep, you take left, I take right. Off they go over to my chair. Chomp! Chomp! “AAAAAAA”, I screamed, “come back here you two!” Wheeeeeeeeee!!! Crash! Meow, meow.=Oh, he still not used to new house. Meow.=Yep, and he forget about new addition to play structure. Hope he not break something, sure hit hard. Meow, meow.=That okay, play structure well built, it be fine. “Moooaaan, grooooaan!” Meow.=Oh, he do human purring, sound nice. Meow, meow.=Yep, he happy now, forget about human Lena.

I think we should have time for one more short story before the end of the year, so please join us this week for the beginning of “The Wilderness Staircase Mystery”. Previous chapters of this story, and other stories can be found on my home page under, 20/20 Investigations, Inc.

Picture of Mr. Cat kindly supplied by his human, Nina.