Posted on February 9, 2021 by stevescountry 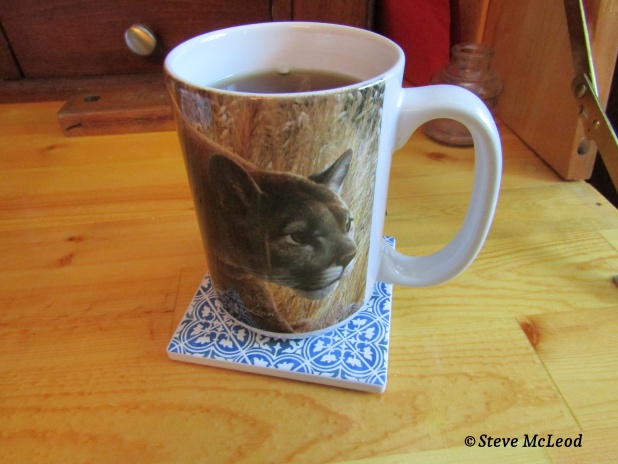 Good morning everyone! It’s another chilly one out there, but warmer by a couple of degrees. I’m not sure if that really makes much of a difference though. So, there’s extra coffee on this morning, just help yourself and relax while watching the birds. Oddly enough, there are lest birds at the feeders when it gets very cold like it is these days. Personally I would think that birds would want an easy source of food when it’s super cold. But instead they stay hidden away among the trees. Not all the birds of course, but a lot of them. Many still show up and enjoy the free food that is being offered that day.

And that includes the shrike, of course. He was here twice yesterday and the blue jays were able to chase it away both times. The poor little birds, it’s cold, they need to eat and the shrike comes around and the birds need to stop eating and hide. One poor little red-breasted nuthatch was out in the open when that shrike showed up the first time. So he just sat there as still as could be, hoping the shrike wouldn’t come down after him. That would have been the end of my little nuthatch. So I got my jacket and boots on quickly and went out on the deck close to the nuthatch. I didn’t scare the nuthatch, he knew that I could be trusted, so he continued to sit motionless.

I stood there watching the shrike, protecting my nuthatch. Finally one blue jay attacked, making the shrike fly, then all the other blue jays attacked as well. But it’s the male blue jays that attack the shrike, the females take cover in safe locations. There was 4 males to attack the shrike and they did a good job, chasing that shrike a long distance away before returning. The birds began to move around again once the blue jays were out of sight chasing the shrike. The little nuthatch came and landed briefly on my shoulder and looked at me, then back down to the suet to finish his breakfast. Almost like he was saying thank you. I hope you all have a wonderful day and God bless!