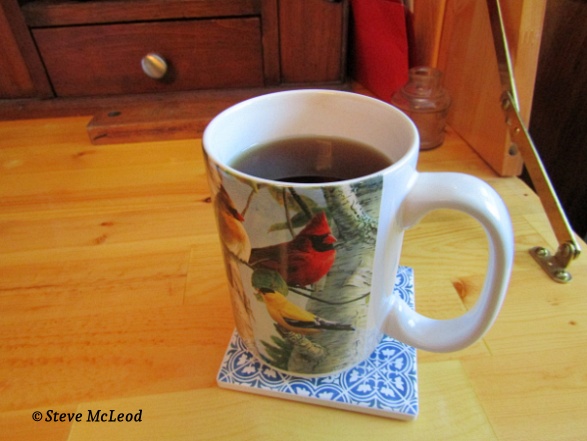 Good morning everyone! There’s some nice hot coffee waiting for you while you sit back and relax with us for awhile this morning! It’s another beautiful morning with a temp of 30F (-1C), beautiful bright blue sky and those golden rays of sunshine lighting up the surrounding trees. The look and feel of spring is definitely here. And as I was putting out seeds for the birds I heard a gull flying around, took a bit to spot him as he was quite high but what a joy that was. When the gulls arrive then spring is definitely here. Of course, that was just one gull, but there are likely others. There is always a few that show up early, they are the scouts, checking out the situation, mainly to see how much open water there is.

Now I just need to wait for my gulls to show up at the feeder. Oops, just remembered, I forgot to buy bread for them when I was shopping this week. They like bread. And it’s cheap bird food. And considering how big those birds are, cheap is good. We had a cute visitor to the feeder last night, Muffin alerted me to it. A flying squirrel. Those are beautiful little animals, same size as our red squirrels, but their fur is so totally different, thick and soft. And they only come around at night. They don’t actually fly though, they glide their way between trees. Now I need to get a picture of these critters, problem is they don’t show up at the same time.

Speaking of squirrels, poor Jasper. He had a tough day yesterday. Chase showed up again, that’s the other squirrel from before that nearly took over this territory. Jasper was chasing Chase for over 2 hours straight without a break. And were they ever running fast! They also got into a few fist fights as well. But watching them running through the trees was just amazing. Finally Chase gave up and left. Sylvie was here eating while all this was happening, she’s Jasper’s mate. Territory fighting is strictly for the males, unless it’s the female’s territory. Anyway, Jasper just got back here and…he spotted another male squirrel.

A new one showed up, never saw him before, smaller than Jasper so he didn’t stick around to fight but the chase was on! He chased the newcomer for half an hour before the newcomer gave up and left. Jasper comes back. I’m sure he couldn’t believe his eyes…Chase was coming back through the trees and Jasper was off again. Poor Jasper, Chase had a nice long rest but Jasper didn’t. Another almost 40 minutes chasing Chase before he left again. Good thing that Sylvie has been keeping Jasper in good shape with all that running. Hmm, no time to tell about Jasper and Coffee, perhaps tomorrow. Have a fantastic Friday and God bless!