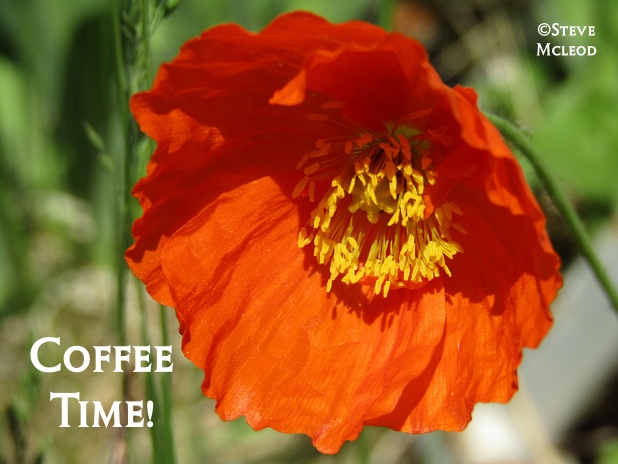 Good morning and Happy Sunday everyone! It’s a beautiful, sunny morning here, though still rather cool at only 21F (-6C). The coffee is ready, just help yourself, sit back and relax. The birds are busy this morning, blue jays are going back and forth steadily, at least 6 of them, maybe 8. It’s hard to tell sometimes. Lots of redpolls still here, I thought they would have all headed north by now. I guess the return to cold weather held them back. The gulls were here and had their breakfast already. Jasper has been here, haven’t seen the chipmunks yet. I also haven’t seen Sylvie lately, maybe she decided to go elsewhere now that there are 4 male squirrels around here.

Jasper and Freddie tolerate each other, they will each sit on their own end of the deck and chatter at each other while eating their peanuts. Jasper always chases Chase however, and the new little male that has shown up. I named him Albert. He’s not the brightest squirrel around, Jasper has beat him up a couple of times and he keeps coming back. This is not getting good for Jasper. It’s also not good for the chipmunks, too many squirrels to deal with which could keep them away. That happened one summer and I was down to just one chipmunk. Actually none for awhile, but one decided to come back. Guess those peanuts were just too good.

Poor Jasper. Yesterday I went outside and didn’t realize that Jasper was in the peanut box eating. I stepped down beside the box, a little hard I guess, and Jasper began running in circles, then came flying out the door and right off the deck. His little legs were flapping around in every direction, he still hasn’t learned he can’t fly, and he landed with a belly flop. Then he continued running with his legs stretched out to the side. I have seen him do that before when he belly flops, don’t know how he does that. I called to him, “Jasper, it’s just me”. He stops, sits up and looks up at me and chatters. “Sorry, I didn’t know you were in the box.” He sits looking, then decides to return. I gave him a nice fat peanut. “So how’s your day going Jasper?” Loud chip. “Well, besides that…” I hope you all have a wonderful day and God bless!