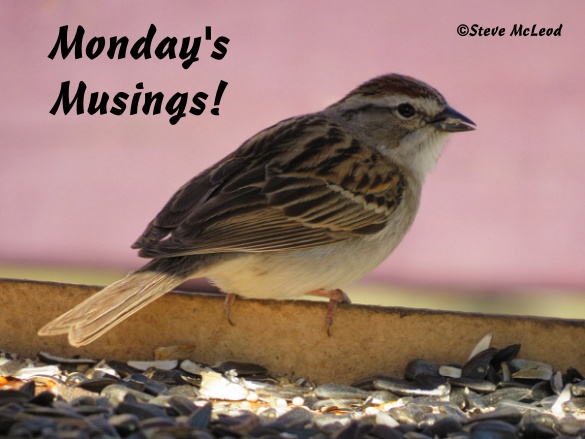 Good morning everyone! It’s a beautiful spring morning once again. The sun is shining and it’s going to be warm, both today and tomorrow. Then it cools off a lot once more as we get stuck in what is called a trough, bringing clouds and rain for 4 or 5 days. We do need the rain however, so that will help things to grow as we now enter our short growing season. The feeders are basically empty today, except for squirrels and a few little birds like chickadees and purple finches. Sir George and Sir Henry (my two herring gulls) were here for breakfast, plus another gull who is new. Guess he decided to check on things after watching the other gulls come and get food.

A large bear had to be shot not too far from where I live, it had been trying to get into someone’s home. I wonder if it was that large bear that came around here sometimes? So they issued a bear warning for people as there have been a number of bears coming into town this spring looking for food. They woke up early this year because it was warm, our snow melted early, then it turned cold. That meant no natural food for the bears, so they come into town when that happens. Problem is, they then get used to the easy food in town and they don’t always want to go back to their natural food. So they issued guidelines for people to follow.

Don’t leave garbage outside. Clean BBQ grills immediately. Don’t feed birds. (Hmm, crossing a line here). Don’t wear dark colors when walking in the woods. (that’s a tough one, that’s what I have). Don’t bend over while out in the woods. (how else do I take pictures of butterflies and flowers?) Don’t walk alone. (I wonder if I could train Muffin?) Carry bear spray. (got that one) Carry an air horn. (now where am I going to get that?). Oh well. This isn’t going to be easy. If I stop feeding birds I don’t get pictures to share. If I stop going for my walks to the river, I don’t get pictures to share.

Then there’s the other side, if I go for a walk and get eaten by a bear, I don’t get pictures to share. I never used to think about bears before, now I do. I have had close encounters with bears numerous times over the years, but it never stopped me from doing things. Now, I admit to being nervous. All it took was that bear charging me. So sad. Now with the leaves out, I can’t see along the path to the river. In some places I can’t see beyond the path itself. Sigh. My wildflower post will be a little later today, but it’s coming. The top featured image is the chipping sparrow. I hope you all have a wonderful day and God bless!