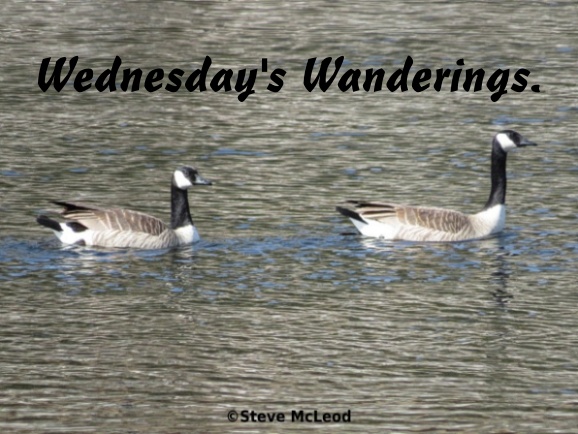 Good morning everyone! It’s another cool, cloudy morning and smoke has moved in a little stronger smelling than yesterday. As I mentioned before, we had some rain Monday with thunderstorms and that reduced our forest fires from 115 to 95. But, 70 new fires were sparked by lightning so we now have 165 forest fires burning at present. The two largest are 299,000 acres and 337,000 acres in size, with many others between 100,000 and 250,000 acres in size. Of the 165 fires, 125 of them are not under control, 11 are being held, and 29 are under control. Even with some showers and cooler weather this week, that’s still a bad situation, and it looks like warmer weather will return on the weekend. What we need is a general, widespread all day rain to stop these fires.

My gulls are not coming much anymore. Sir Charles was here this morning, and Ricky. Ricky is my ring-billed gull friend, and quite tame too. He was here in the spring, then disappeared during nesting season, now he’s back again. The others are the much bigger Herring gull. The chipmunks have been busy this morning, all but Chester have been around. Actually, Chester hasn’t been around for a while now. I hope nothing happened to him. Slim has been here too, but he hasn’t met up with any of the chipmunks. I think the chipmunks have been watching carefully so they don’t meet him.

One of the chipmunks is really chipping his warning call, must be some kind of danger out there. I can’t see anything, but maybe he just met up with Slim. Well, it’s official now, Steve and Muffin just might be doing some wandering of their own very soon. Steve’s landlord is selling her house, which includes this apartment, and that undoubtedly means Steve and Muffin will have to move out. From what Steve has learned through previous adventures like this, the new owners will want the apartment for a family member or friend, therefore Steve and Muffin will be out on the street. We have a 0 occupancy rate here, been that way for 3 years now, that simply means there are no apartments for rent, at any price.

You know a lot about Muffin, but not much about Steve. Steve is disabled, though he is still able to walk around as you know. Steve doesn’t drive or ride a bike, due to his health. Steve is on disability pension, which limits the amount he can pay for rent. So it’s going to be a rough time for Steve and Muffin. And not many places allow pets these days. This will also affect Steve’s ability to get photos to share in the future. Fortunately he has a lot that you haven’t seen yet, so that will help for quite a while. But some changes to the blog will have to be made as well, probably just not posting so often, which might not be a bad thing.

That won’t start for a while anyway. Steve is hoping the new owners will let him and Muffin stay. Steve has put his name in for a senior’s apartment, but that’s a 3 or 4 year wait, which doesn’t help right now. No matter what, feeding birds will likely be a thing of the past too, which also limits pictures. But, these things happen, it was just unexpected since Steve’s landlord never gave a hint that this was coming. But it’s still a beautiful day, the sun is shining now, though hidden by smoke. Have a wonderful day everyone and God bless!