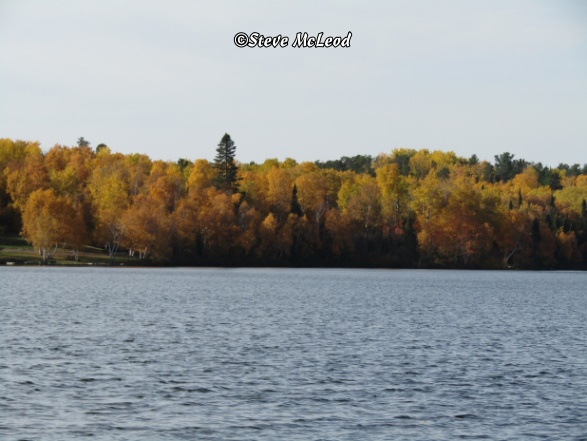 Good morning everyone and Happy Friday! It’s a cloudy, cool morning here and it’s going to stay cloudy today, with possible flurries. It’s that time of year. It’s a busy morning at the feeders again. Theodore just arrived and has claimed the main feeder for a while. I will have to replenish the supply of seeds when she leaves. There was a lot of birds here a little while ago, then suddenly the blue jays let out an alarm and what a noisy alarm it was too. All the other birds disappeared, the female blue jays went into hiding and all the male blue jays attacked the intruder.

Unfortunately I didn’t get to see who the intruder was, but it was a bird the blue jays didn’t like. That would mean a small hawk, like the sharp-shinned hawk, though they should have all migrated south by now. Or it could have been a northern shrike, but that would be very early for them to show up from the far north. I have never seen one before the end of November before. They usually follow our other northern visitors down, like the pine grosbeaks and redpolls. And normally it’s December before they arrive here. So whether a hawk or a shrike, it’s a bit unusual.

Too bad I missed seeing that one. I watched as all the male blue jays came flying back. There were 12 of them, which means there are 10 females. The evening grosbeaks have finally returned now as well, that’s quite a bit after the blue jays. But Theodore is still on the feeder, so the grosbeaks will have to wait a bit for their breakfast. Remember I wrote about that baby deer that was hit by the car? It was out here with it’s mother this morning walking around and munching on leaves, showing no signs of injury. That happened 12 days ago, so it was nice to see the little deer in good health still. Hmm, Theodore has gone now and the feeder is full, totally full of evening grosbeaks.

I better go give them more seeds. Yep, they needed seeds alright, Theodore had eaten almost everything that was there, except for the seeds right underneath her. That always happens. Well, there is at least 30 of the evening grosbeaks now and I think there are actually more. There were some up in that one tree out back that still has some leaves, making it hard to see the grosbeaks sitting on it’s branches. They are such a nice, colorful bird to have around. And their lively chirping is a joy to hear, even though they do tend to argue a lot. Perhaps I can get some new pictures of them today. I hope all of you have a fantastical Friday, and God bless!

← Steve And Muffin’s Weekly Art In Nature. #9
The Investigators, Inc. The Search. Chapter 14. →