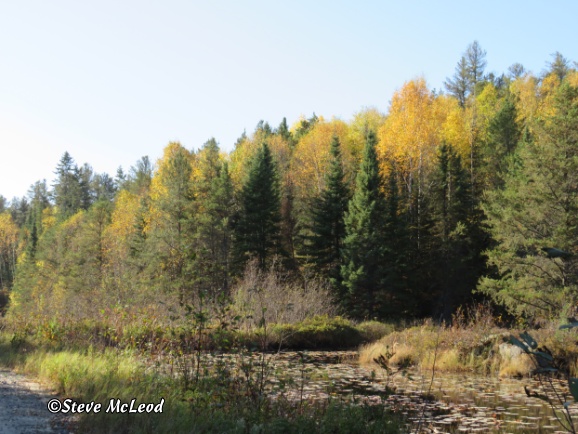 Thanks. I looked around. “Hey, a nice long branch, that will make it easier to cross,” I said. “Right”, said Dad. “Really, just use it like a cane, stick it in the creek as we walk across,” said I, and off I went. The log was very slippery but the branch did help. “Here”, I said as I tossed it back to Dad. The branch hit the side of the creek in some wet mud and splattered the mud onto Dad. “My glasses!”, he shouted, “they’re covered in mud.” “Wash them in the creek”, I called back.

He bent over to do so, and slipped on the mud. Dad yelled. He just kind of slowly went down into the creek. Right up to his waist. That was too much. The look of terror on Dad’s face. Priceless. “Bonehead!,” he called out. How could he be enjoying that? Dad decided to walk across the creek. He figured he was wet anyway, so why not? Makes sense, I guess. Then about half way across he sat down. That was hard to believe, sitting in the middle of the creek, he was now up to is neck in the water.

He claims he slipped on a wet rock. All the rocks in the creek are wet. But he finally made it across and we are at the bottom of that hill. We looked for a better way up than the way we came down. That wasn’t easy, but we found a spot. The rain had almost stopped. “Good”, I said, “now maybe we won’t get so wet”. Dad just looked. That was it. I couldn’t hold back any longer. I burst out laughing. Think I laughed most of the way up that hill. “You go up first,” said Dad.

Naturally. Suddenly it started to rain hard. Anyway, Dad and I started off up that hill. It really was a somewhat large hill. And not that easy getting up. Especially with all that rain. That hill was all rock. Granite actually. With some trees. And a lot of moss. Which was now wet. Wet moss is very slippery. “Get going”, he said, “can’t you see it’s raining?” “We are already soaked,” I said, “can’t possibly get any wetter”. Off we went. Everything was going good until my foot hit some loose moss. I slipped. And slid down.

Poor Dad. He tried to get out of the way. But he wasn’t quick enough. Whump! “Oooo!” Seems my foot collided with Dad’s stomach. He sat down. “Tired?”, I asked. Dad just looked. After he relaxed for a bit we continued our climb. “I’ll go first,” said Dad. That’s odd I thought. He always wanted me to go first. Oh well. About 2 thirds of the way Dad suddenly stops. I didn’t notice that and bumped into him just slightly. He sat down again. “Tired?”, I asked. Dad just looked. “It’s okay, we can stop for a while,” I continued.

Dad said, “shhh.” “Why?”, I asked. Dad pointed up the hill. There was a black bear just starting to come down, heading our way. I moved a bit to get a better look and stepped on a loose rock. “AAAAAAAAAAAAAAAA!!!!,” yelled Dad. The bear stopped, then took off running. “That got him running,” I said. “Bonehead!,” said Dad, “you stepped on my ankle”. “Oh,” I said, “I thought it was a loose rock.” “Someone has a loose rock,” said Dad. Not sure what he meant by that.

We finally made it up the hill and there was no sign of the bear at the top, which was nice. Dad was quite tired by the time we got back to the car, but he suggested stopping at our favorite coffee shop on the way back. “Good idea,” I said, “I’m hungry.” “I’m the one that didn’t eat,” said Dad. “You should have eaten your sandwiches,” I said. Dad just looked. At the coffee shop the waitress said to Dad, “you’re sure wet.” “It was raining quite hard out there,” said Dad. “But your son isn’t as wet as you,” she said. “He’s smaller,” said Dad. She looked puzzled a bit but took our order and left.

“You have mud in your hair,” I said to Dad. “Why didn’t you say that before we came in here?”, Dad asked. “I just noticed,” I said. Dad just shook his head and put his hat back on. When the waitress came back she asked Dad how he had gotten so muddy in the rain. He was still covered with mud. “He fell in the mud when we tried crossing a creek on our hike,” I said trying not to laugh. The waitress laughed however, so I did too. When it came time to pay Dad took out his wallet and water poured onto the floor. “Did you go swimming too?”, asked the waitress. That was too much, I burst out laughing and went out to the car. “How do you laugh so much?”, asked Dad. “Practice,” I said.