Posted on February 3, 2022 by stevescountry 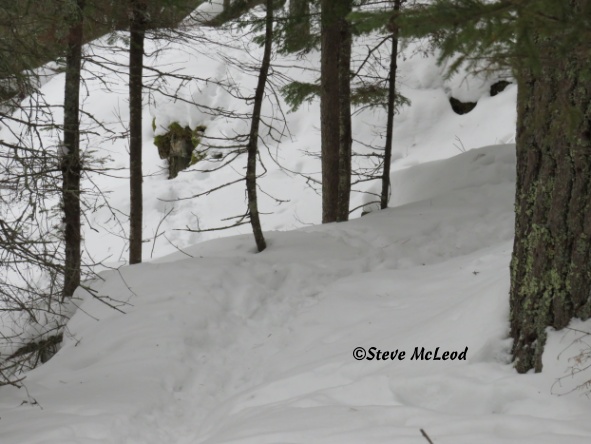 Good morning on this rather cold Thursday! That air was hard on my lungs this morning as I went out to feed the birds. And two of the hanging feeders needed to be filled so I had to stay out longer than normal as well. It was -49F (-45C) this morning, making it our coldest morning of the winter so far. I am glad there was no wind however. I went out earlier this morning than usual to have things ready for the birds when they arrived, but the little redpolls were already out there waiting for me, and the chickadees showed up soon after I came out.

All the birds are out there busily eating their breakfast right now. And I am inside trying to stay warm and drinking some nice hot coffee! Would you like a cup this morning while I talk about my walk to the river on Monday? There you are, now just sit back, relax and listen to my little story. It was a nice day on Monday, mild and cloudy before the snow began. As I was getting close to what I call the dark part of the path I heard something, so I stopped and looked around. It is easier to see longer distances in the winter since there are no leaves on the smaller bushes.

However, in one direction there are a lot of smaller spruce trees and a tangle of shrub branches. That is where the sound came from, and it sounded like growling. But when I stopped I could see or hear nothing. Then, just before continuing my walk I heard it again. It was definitely a growling sound, but I still could not see anything. But I had my camera ready just in case. There was no one else around so it had to be a wild animal, but I don’t know why it was growling. But I heard nothing more so I continued my walk. The foot path that goes off the main path was a bit more used than before but still a lot of loose snow.

I decided that day to walk further to one of my favorite spots which is higher, overlooking the river. Getting up that hill was kind of slow going since it is very steep and the path was not well used there. But I made it up to the top and was able to enjoy the wonderful view. Right near the top I saw some tracks in the snow, but they were not dog tracks, these were cat tracks, large ones, not made by a house cat. By the size I would say there were bobcat tracks, as Canada lynx tracks are quite large, even though the two cats are not much different in size. They are both beautiful wild cats.

The bobcat is more aggressive, generally, than the Canada lynx. The tracks were fresh, probably made earlier that morning. It would be great to get a picture of one of these animals. But I did not see any unfortunately. Going down that steep hill was harder than going up and I slid several feet in one spot, but never fell. It was a beautiful day for a walk though, with some lazy snowflakes falling now and then. Well, I am ready for another cup of coffee and I think the birds are likely ready for more food. Thank you for reading, have a wonderful day and God bless!

Steve and Muffin. (the top featured image shows the continuation of the path on top of the hill)