Posted on March 5, 2022 by stevescountry 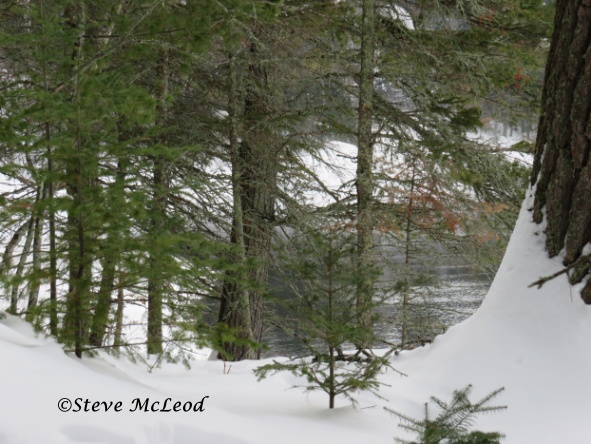 Good morning everyone and Happy Saturday to all of you as well! It is much milder this morning with a temperature of 21F (-6C). It is not going to warm up to melting temps however, even though we are close. It is cloudy today as well, if the sun was shining it might actually do some melting. But instead we are going to receive a bit more snow. We did not get any last night like we were told we would, it kind of slowed down I guess, so we will get it later today instead. It will not add up to much however, which is fine with me.

Ice is starting to really show up too, especially on streets. Bald eagles are starting to return now. They are always the first of our summer birds to return. We do have some bald eagles that stay here year round however, though it seemed like there was only a couple of them this winter. Last winter there were a lot of them. The two I saw yesterday were young eagles, so I knew they were migrants coming back. Only the adults will stay the winter. It is so nice to think of warmer days coming.

One time at my cabin in the woods, it was a beautiful evening but a bit cool, so I got a little bonfire going and sat there watching the fire as the day slowly began to change to dusk and then slowly the darkness of night began to descend. But the light of the bonfire lit up the area in front of my cabin, and I heard an owl calling in the distance. I used to imitate their calls to get them to come closer. I got very good at it. So I tried imitating his calls.

It was a “Barred owl”, one of our 4 large owls. It did not take long and it came to sit on a branch of a jack pine, about 8 feet off the ground. I watched him as he also watched me. The light of the fire made him quite easy to see. Then as I was watching a second one showed up and sat on the branch beside him. That was likely the female, the male is usually the first to check on intruders. No, I did not try any more calls when they were so close. Those large talons of theirs can do a lot of damage.

And yes, they will sometimes attack people if they are provoked. They were obviously nesting in the area, which was nice to know. They watched for a while then flew off into the darkness. I especially watched the direction of the second owl as she flew off and tried the next day to see if I could find a nest, but found nothing. But they do have large territories. But it was a nice evening with my owl friends. That is solitude. Beautiful solitude. Have a most wonderful Saturday everyone and God bless!

Steve and Muffin. (Praying for the people of Ukraine)