The Investigators, Inc. The Icelandic Mystery. Chapter 7. The Dungeon. 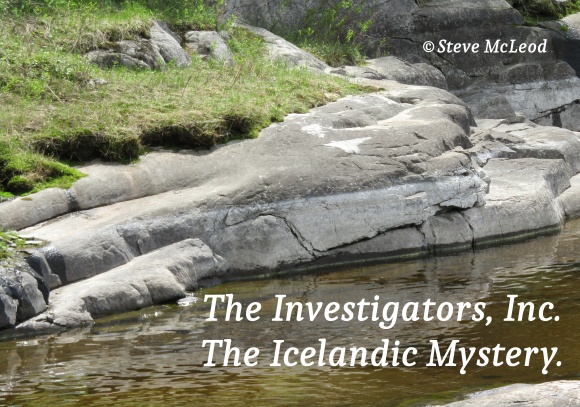 The cats alarm systems were not working so MC ran back upstairs just as Kat came out of the room. Meow!=Need help quick, human Steve down! Kat went to the other girls room and banged on the door. “Code red 1A!”, she yelled and the other girls were out fast, guns ready. Code red 1 means Baldwin is down, Code red 1A means I am down, either dead or seriously hurt.

Then Kat banged on Baldwin’s door yelling the same thing. The other girls heard it too and came out but Baldwin held them back. “We will be the backup,” he said, “come with me now.” Meanwhile downstairs before the girls got there. “Take them to the dungeon, fast,” said Mikkael. Two of the men dragged me while two others grabbed hold of Sigurbjorn, put handcuffs on her and pushed her along the path out the back door.

Muffin watched carefully. The cats did not have their backpacks on, a terrible mistake on my part. Kat and the girls came running down. “Where is Steve and Sigurbjorn?”, she demanded of Mikkael. “How should I know?,” he retorted, “Sigurbjorn is very beautiful, they likely went off somewhere to be alone.” “Do we need to have another talk?”, asked Jennifer.

“Do not be a fool,” he said, “look over there behind you.” There were 4 men with large guns pointed at the girls. “Now, I would suggest you put down your weapons,” said Mikkael quite happily, “or they will begin shooting.” “I do not think so,” said Baldwin in his usual loud voice, “my girls have your men outgunned right now, and my gun is pointed directly at you. I would suggest you tell your men to put their weapons on the floor and put their hands on top of their heads, now. I have no patience to wait.”

And he then got his gun aimed clearly at Mikkael. “Okay, put your weapons down like he said,” Mikkael told his men. They did so and then Rock and Benson went to see if they had more weapons. They each had a handgun and knife. “Now, perhaps you would like to answer this woman’s question,” said Baldwin. “I already did that,” he said, “Sigurbjorn always goes after any men that come around.”

Jennifer then kicked him 3 times knocking him against the wall and he slid to the floor. “Now,” said Kat, “maybe a truthful answer.” Meow,meow.=He tell men to put my human and Sigurbjorn in dungeon place. They go outside back door. Meow.=And that man punch Sigurbjorn many times in stomach. “Rock,” said Baldwin, “that man over there needs a sore stomach. It seems he gave one to Sigurbjorn.”

Rock walked over to the man and punched him hard in the stomach. He fell onto a chair groaning. “Now Mikkael,” said Baldwin, “where are they?” “I have nothing more to say,” he said. Jennifer then kicked him twice more knocking him against the wall again and onto the floor groaning very loudly. “Now Rock,” said Baldwin, “that man still needs more attention for his stomach.”

“No, no!”, he said, “I can tell you where the dungeon is located.” “Good,” said Baldwin, “you will show Kat and her girls where it is. And if you are lying, well, they know what to do. Oh, and Rock will be going along as well.” They all quickly got their backpacks, including the cats, before leaving for the dungeon. It was apparently located in one of the caves.

Meanwhile, back to us… They handcuffed Sigurbjorn and I together and tossed us down into what they called the dungeon. It was a 20 foot drop but Sigurbjorn made sure she landed first to at least partially catch me. I was in rough shape after that slam to the floor on my back. Then one of them came down on a rope ladder and lit some candles so it would not be totally dark. Then he left without a word.

“You do not need to worry about animals in here Steve,” said Sigurbjorn, “I have explored these caves and have never seen so much as a bug in them.” “You explored these caves by yourself?”, I asked her. “Yes, of course,” she said, “when you do not have friends you learn to do things by yourself. And I have not had friends all my life, so I learned early to do things alone.” She started to cry.

“You have friends now Sigurbjorn,” I told her, I and my whole team are now your friends.” She was silent for a bit. “If we get out of here alive,” she began, “will it be possible for me to come home with you? Oh, wait, that did not come out right! I just mean to come along and perhaps be a part of your team also.”

I laughed. “I understood what you meant Sigurbjorn,” I told her, “we would all be very happy if you would come back with us. And, we will get out of here alive.” “You have much confidence,” she said. “I have a good team,” I told her. She was silent again for a while. “Thank you very much Steve,” she said.

15 Comments on “The Investigators, Inc. The Icelandic Mystery. Chapter 7. The Dungeon.”