The Investigators, Inc. Back To Iceland. Chapter 5. The Butcher. 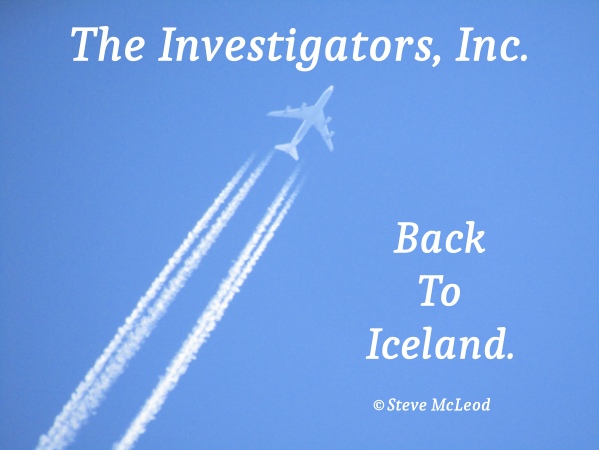 I could not believe my eyes when they brought this guy into my cell. “A cell mate for you PI,” said the police officer. That guy was nearly as big as Rock. His shirt was open and the word ‘Butcher’ was tattooed across his chest along with 2 crossed knives. He definitely did not look like a friendly type. Then he pulled out a rather big knife. How did he get in here with that thing? Did they not search him.

“How did you manage to get a knife in here?,” I asked casually. He did not say a word for a few minutes so I kept to myself. “They tried searching me one time,” he said half laughing, “4 of them ended up in the hospital. Now they do not search me.” Then he laughed loudly. This is not looking good, obviously he is here to kill me and he certainly does not seem to be concerned about it. That means the 2 officers on duty tonight are also working for Harmon.

Meanwhile…There was a knock on Baldwin’s hotel room door. Rock answered and John was standing there. “Come in,” said Rock. “What can I do for you John,” said Baldwin, “you really should not be seen with us.” “I know,” he answered, “but this was too important. There is a guy called “the Butcher” that works for Harmon. He and one of Harmon’s men were eating at the restaurant downstairs, next table to mine. Good thing they did not know who I was.

Harmon hired Butcher to kill Steve and he has been put in the same cell as Steve now. The 2 cops on duty tonight are also on Harmon’s payroll. Steve won’t last the night with Butcher in there. He is almost as big as Rock here.” “Rock, get the lawyer and go talk with Steve,” said Baldwin, “they will have to bring Steve out to talk with him, then you can talk with this Butcher.” “Right boss,” said Rock and off he went. “I will pay you for this information John,” said Baldwin.

“Forget it,” said John, “Steve deserves better than what he is getting right now, so this one is free.” Then off he went as well. Benson, Baldwin’s bodyguard closed the door. “I think things are getting worse all the time Benson,” said Baldwin, “I really don’t know if we can win this one.” “We could break him out of jail easy enough,” said Benson, “and Chung can change his face, then he and Kat could go off somewhere and live in peace with new identity.”

Baldwin was a bit surprised that Benson said so much, he hardly ever talks. “I have given that some thought, even talked to Kat about it,” said Baldwin, “but she said the two of them would not feel right doing things that way. I can understand that too.” Back to Harmon now…”Oh,” said Harmon’s bodyguard, “I got Butcher in that PI’s cell like you wanted. We won’t need to worry about him no more.”

“Okay,” said Harmon, then he stopped his pacing, “What?!! Butcher will kill that PI!” “Yeah, that is what you…”, was as far as he got. “Get him out of there NOW!”, yelled Harmon, “if he kills the PI, then you will die, I will die, the Company will die! Get Butcher out! Do you hear me? Get him out!” “But how boss?”, Butcher ain’t gonna like this. Remember what he did to those 4 cops?”

“I do not care how you do it,” said Harmon, “drag him out by his heels if you must, but get him out before he kills that PI!” So off went the bodyguard shaking his head all the way down the hall and saying to himself, “Harmon is losing it, he really is. Drag him out by his heels, he says. Hey, that is it, I will kill him, no other way to do it.”

However, Rock and the lawyer were there first and they took me out to another room to talk with the lawyer and as they disappeared around the corner, Butcher was standing by the open cell door with his knife in hand. Suddenly Rock smashed him against the cell door, then slammed his head into the iron bars. Then he took him inside and knocked him several times against the cement wall and, well, soon Butcher was lying peacefully on the floor.

But, one of the officers was back and slammed the door shut on Rock, telling him he was under arrest. “I do not think so,” said Kristina. Her and Angel were standing there with guns. “That other guy attacked Rock with that knife, he was just defending himself,” said Angel. Butcher did put his hand on Rock’s shoulder before Rock entered the “discussion”. The officer looked. “Open the door and let him out,” said the other officer, “we do not want trouble right now.” “Especially since it will come out in court that Harmon has been paying you two,” said Kristina.

298 Comments on “The Investigators, Inc. Back To Iceland. Chapter 5. The Butcher.”