The Investigators, Inc. Back To Iceland. Chapter 6. Explosion! 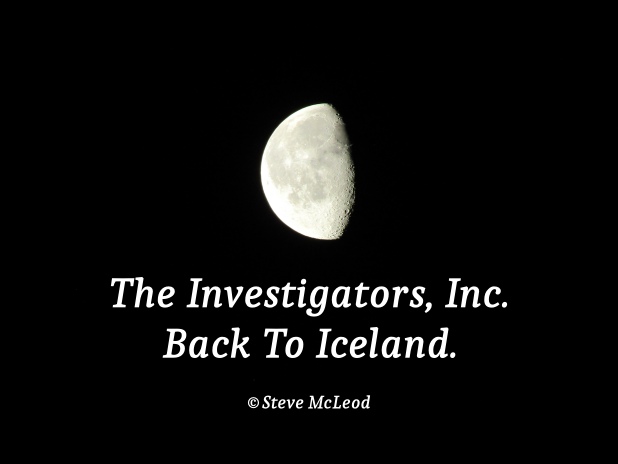 The two officers began talking in Icelandic, but by then Salka was there and was able to translate for the other girls. The officers were worried now that the girls knew they had been payed by Harmon. “Of course you know that Harmon is not a cop anymore,” said Salka to them. They claimed not knowing that. “He was fired two years ago for dishonorable conduct,”, she said, “that will come out in court tomorrow too.” The officers were getting quite nervous now.

The lawyer and I came out and my lawyer said I was supposed to have a separate cell, that was the deal, to keep me safe. The officers said all cells were full, but they consented to keeping me locked in the room we had just used. So that is what happened and my lawyer left. Rock, Kristina, Angel and Salka stayed for extra protection just in case. We were not sure what Harmon would do now that Jake had contacted him.

Meanwhile…Jake called back in exactly half an hour. “Well Harmon,” he said, “what is your answer?” “Okay,” he said, “I will do it, but the books first.” “For the CEO of The Company, you sure do not know much about how things work in the real world,” said Jake, “first Steve, then you get the books.” “How do I know you can be trusted?”, he growled. “You don’t,” said Jake, “just like I don’t know if you can be trusted.

You will just have to take my word for it. You will get the books, but not the money. But I wait until Steve is free, completely.” “Okay, okay,” said Harmon, “he will be out tomorrow. When do I get the books?” “I am here in Iceland now,” said Jake, “once I hear the news, I will deliver the books to you so no one will know. Unlike you, I am good at my job and know how to do things. But do not try to cross me, you would seriously regret that.” Then he hung up.

Meanwhile…Baldwin gets a phone call late that night. “For you boss, it is important,” said Benson, Baldwin’s bodyguard. “What is it?”, asked Baldwin. “Sorry to wake you Baldwin,” said John, “but thought you would like to know, word on the street is a contract has been put out on Steve. Once he is free and the books given back to Harmon, then Steve is dead. There might even be a try tonight with an explosion of some kind, not sure why Harmon would do that, but he figures to blame someone else I guess.”

“Thanks for this John,” said Baldwin, “but, why are you helping?” “Maybe I am just getting sentimental as I get older,” said John, “but Steve deserves better. An even fight is one thing, but this way he has no chance. And no, I am not looking for anything.” Then he hung up. Baldwin called Rock and told him to watch carefully tonight. Then he called the police chief and told him also. He soon arrived at the station where I was being held and with 5 more officers.

Salka explained about the other two officers being paid by Harmon and that they do have proof. The officers then admitted it was true and they were locked up in one of the cells, the prisoner in that cell was moved in with Butcher. I imagine he will not sleep anymore tonight. The chief checked on me and was satisfied I was safe. He then allowed Kristina and Salka to stay with me. Rock took Angel back to the hotel, then returned to the station.

But before he got back something came through the window of the room in which I was locked. The resulting explosion rocked the building! Rock arrived just after and saw the window blown out. He came running in as he heard ambulance sirens coming. The officers were bringing out Kristina and Salka. Rock ran in and found me behind the remains of the sofa where I had been lying down. The girls had just enough time to flip the sofa over so I would be behind it.

Then they jumped for cover just as the device exploded. All 3 of us were still alive, but hurt and were taken to the hospital. Police were put at the door to our room for protection, but the girls were given permission to be inside with us. Baldwin had requested we all be put in the same room where we could be protected more easily.

Meanwhile…”Direct hit boss,” said Harmon’s bodyguard, “that should finish the PI.” “What are you talking about?”, asked Harmon who was half asleep. “They got the bomb through the window and got away,” said the bodyguard. That woke up Harmon very quickly. “What??!,” yelled Harmon, “that was supposed to be off! Now you and I are dead, you hear me, dead!”

11 Comments on “The Investigators, Inc. Back To Iceland. Chapter 6. Explosion!”