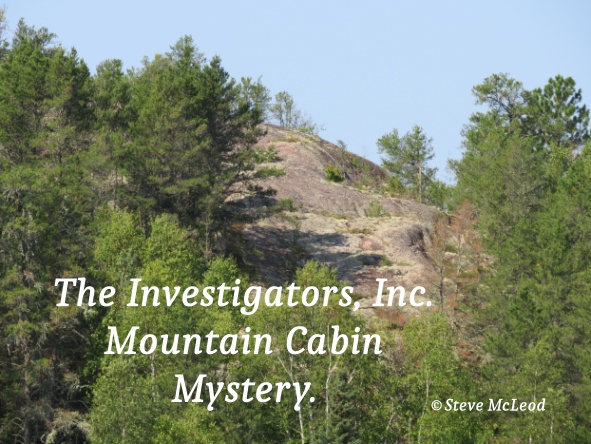 We left in a hurry. Fortunately we have everything needed with us to make 4 stretchers though I wish we did not need to use even one, but we did, for Nyura’s body. After about half an hour Angel fell and was unable to get up. “She is burning up,” said Mriya, “though I do not understand why, there is no infection.” We quickly made another stretcher for her.

These are also able to attach to each other, one on top of the other, without touching. So Rock and Benson could carry both. It was only another 5 minutes and Kat fell. She was also burning with fever. “I think we are being followed,” said Jennifer. “I agree,” I said. Meowr.=Maybe we go back, do scouting. “Good idea,” I said to the cats, “but be very careful.” Off they ran through the trees.

“We may as well stay here until the get back,” I said, “we obviously cannot outrun them anyway.” The cats came upon the men not far from us. MC took aim and “Thwock!”, down went one of the three men. Then Storm aimed and “Thwock!”, down went another man groaning. The third man turned and began shooting, but in the air above the cats, not realizing it was not people after them.

Then, “Thwock!”, and the third man went down from Muffin shooting him. The cats quickly picked up their steel balls and a rifle the men had used, dragging it between Storm and MC. Back they came to us. Meow,meow.=3 bad human men, no more. This gun they use to shoot at team. It was a dart shooting rifle. I gave one dart to Mriya. “It has poison on it,” she said, “I have something that will help them for a while, but we need to know what poison it is or it will be too late.”

“Do not worry Steve,” said Jenny, “Kat will be okay.” I was unable to say anything. We made another stretcher for Kat which Carine and Galyna carried. In about another hour I realized something terrible, we had been in such a hurry to leave we did not pay enough attention to the direction we were walking. So we ended up going further away from the trail we were aiming for. Not too bad I guess, but it means it will take us a couple extra hours to arrive at the trail now.

And with both Angel and Kat having been shot with poison, that extra time could be too long for them. We tried to pick up the pace but poor Rock and Benson were actually slowing down after being awake all night. We stopped for a short rest. “There is a shorter way to the trail,” I said, “but it also puts us in the open more.” “Best to stay in the trees all the way back,” said Benson. Rock agreed with him so that is what we decided to do.

It will be harder walking though which will slow us down, but Q and her men would be able to pin us down easily on the hiking trail which would slow us down even more. Off we went. In a short while gunshots rang out again. They caught up to us! There were several large boulders in that spot, plus a large tree that had recently fallen, so we had some shelter. We held back on shooting as much as possible since we had limited ammunition.

All 3 cats were next to me. “Which one of you is not afraid of heights?”, I asked. Both Muffin and MC put their heads down. Meowr.=Me not afraid, normal for us cats to spend lots of time in trees. I was already disconnecting the antenna from our balloon and gave one end to Storm and attached the other end to Muffin’s help button. Then Storm went up right to the top of the tree closest to us.

“Call Annelie quickly,” I said to Muffin, and she did so. Meanwhile…Annelie just came back from buying donuts for Baldwin and Chung, then she sat down at her laptop which sounded its alarm. Muffin’s message came through=Need help fast, Q have us trap, 3 down, check position. Then she repeated the message. Baldwin was already calling his men and two helicopters were in the air and heading our way in minutes.

Back to us… I knew it would take some time for help to arrive however and I wondered if we would be able to hold out long enough. Angel and Kat did not have time on their side, but what can we do? “Hey PI, this is Svala!”, her voice came echoing through the trees.

“Time to make a deal,” she said. “What kind of deal?”, I asked, though I knew what she wanted. “Give us the gold and Sigurbjorn and the rest of you can go!”, she called back. Does she really expect me to believe her? “I will go Steve,” said Sigurbjorn, “it means your lives.”