Posted on September 18, 2019 by stevescountry 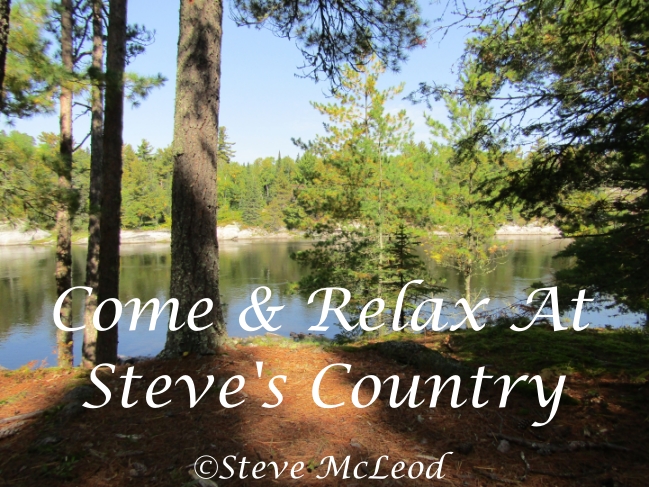 Well, good morning to everyone on this autumn day!  It was so nice to enjoy 3 extra warm days this week.  After all that extra cold weather it felt great to be warm again. So nice to go outside without having to wear a jacket.  I could have windows open again, something that Muffin certainly enjoyed.  She really missed her open window.  So Monday night she slept on her bed in front of her favorite window.  The chipmunks were so happy too.  And were they busy the last 3 days.  Hauling away those peanuts so fast!  However, that’s not why we’re here this morning.  So… 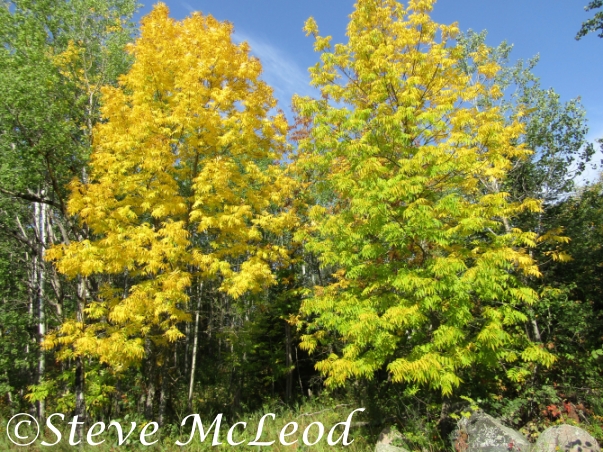 Okay, back to the story.  We were pushing our way through all that thick brush.  Finally we came to an area of pines with no undergrowth problems.  So it was easy going for a bit.  Then we came to a small hill.  We were at the top. Dad looked down.  Long ways down, he said.  At least it’s downhill, I said.  Uphill on the way back, said dad.  Minor detail, I said, we’ll rest before coming back up.  Hey, I can hear a train, I said, we’re on the right path.  Path, questioned dad?  That train is not exactly close, he continued.  Minor detail, I said.

That looks like an easy way down, I said.  Right, said dad.  It really wasn’t too bad.  Sort of.  Dad wanted me to go first.  Naturally.  Down I started.  Watch that loose rock, I called back to dad.  What hawk, said dad.  Not hawk, ROCK, I yelled.  Too late.  Dad found the loose rock and AAAAAAAAAAAAAA, as he slid past me.  Slow down, I called out, or you’ll crash into those…too late.  There was a loud crunching noise as he came to a stop in a thick bunch of bushes.  AAAAAAAAAAAAAAAAA, he called again.  Stop, he said, my glasses fell off!  I went carefully and found them, almost stepped on them.

Poor dad.  He wasn’t having a good day so far.  I helped him out of the bushes.  Wow, you sure flattened those bushes, I commented, trying hard not to laugh.  BONEHEAD, said dad.  Amazing that he would be enjoying this.  What happened to your hat?  Down there, he said.  Not sure how it managed to get so far ahead of him.  The rest of the way down wasn’t so bad.  But we were back into thick bush again.  Naturally dad sent me first.  But for some reason he stayed far behind me.

Then we came to a small creek, which was very hard to see and I almost stepped into it.  Hey, a nice log across the creek, I said.  Try it out, said dad.  Naturally.  Half way across I jumped on the log to test its strength.  No problem, I said.  Dad’s turn.  As he stepped off the log on the other side his foot slipped and he ended up sitting on the log.  However, since he was heavier than me that fall was too much for the old log and down went dad, but he did miss the water.  Not quite sure how he missed it, but he did.

Help me up, he said.  I got a stick for him to grab.  The stick broke.  And dad went backward.  Wow, what a splash!  And there wasn’t even much water in that creek.  Here, try again, I said.  BONEHEAD!  I’m better off doing it myself, he said.  Fine.  He did get out.  After slipping around in the water and mud.  You’re a mess, I said.  Dad just looked at me.  Odd.  Good thing it is such a warm day, I said.  Right, said dad.  Not much farther now, I said.  Right, said dad.

Hmm, well guess we will have to add another part in here so this doesn’t get too long.  Once again, I had no pictures for this adventure so I am sharing some recent pics instead.  I hope you all have a great day and God bless!