Posted on December 19, 2019 by stevescountry 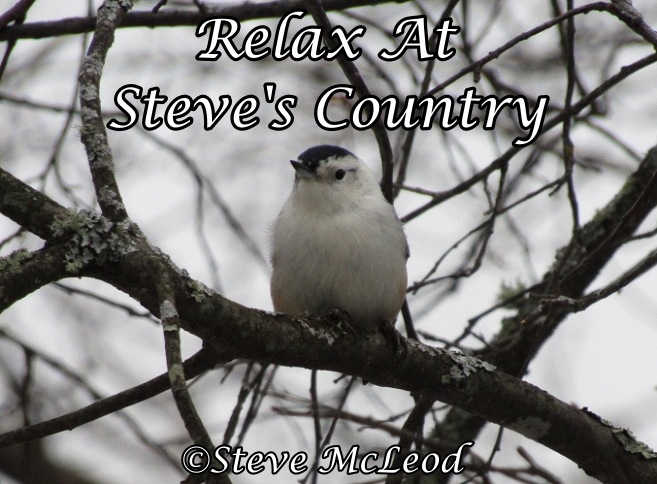 Hi everyone!  It’s another, well, winter day.  And it’s time for part 2 of our adventure,

Looking for another Christmas tree…

I’ll scout around a bit, I said.  It was quiet.  No wind.  Cloudy.  At the base of a pine tree up pops a little brown head.  He looked around a bit.  Then jumped out of his little tunnel and up the tree he went.  Looking for some lunch no doubt.  Speaking of lunch, I was starting to get hungry.  I got back to dad.  Nothing good off that way, I said.  Let’s go this other way, said dad.  He still wanted me to go first.  There was a lot of undergrowth in that direction making it a bit harder to walk.  Poor dad, tripped over a little tree and down he went again.

Three times already, I said.  Never mind, said dad, these snowshoes were a crazy idea from the start.  A lot easier in this deep snow, I said.  Dad didn’t believe me for some reason.  It wasn’t easy getting him up again, dad was a rather big man.  Poor dad, both boots were now full of snow, which was melting, giving him wet feet.  Dad complained about that which unfortunately got me laughing again.  Ha, ha, said dad.  See, you think it’s funny too, I said.

Dad started laughing hysterically at that point and he wanted to rest again so I went on ahead to look.  Found a real nice tree close to that spot.  Hmm, Dad has the saw.  Back I went.  Dad let me have the saw.  He didn’t want to go any further.  Got the tree and returned to where Dad was waiting.  Now it was snowing.  Heavily.  Amazing how quickly it started.  I handed Dad the saw.  You carry it, said Dad.  I already have the tree, I said.  Oh well.

Poor dad was having trouble with those snowshoes…

So he decided to take them off and walk instead.  Not a good idea, that snow was deep.  After a little ways trudging through the snow, which was waist deep, he fell backward.  How did you manage to land on your back?  Never mind, he said.  He had snow all over his face.  And down his neck.  I tried to brush the snow off his face.  Dad screamed again.  I guess brushing his cold face with my rough mitts didn’t feel too good.  When I stood up some snow got pushed on top of his face again.  Dad was sputtering and waving his arms.  By this time I was laughing so hard I could barely stand.

Why do you wave your arms so much?, I asked, when I could finally talk again.  Why do you laugh so much?, he asked.  You keep doing funny things, I said, and continued laughing.  When did you take your glasses off?, I asked.  Oh no!  He lost them in the snow.  I’ll help look, I offered.  Stay back!  Odd.  He actually found them fairly quickly.  And by now there was almost 2 inches of new snow.  We did walk a long way.  Finally back at the car poor Dad was huffing and could barely walk.

The snowshoes would have been easier, I said.  Forget it, he said.  Then it was off to our favorite coffee shop.  Laughing all the way.  I was at least.  It stopped snowing by the time we arrived there.  Nothing like a good cup of hot coffee after a refreshing walk like that, I said.  Dad just looked at me.  But he did enjoy his coffee, and late breakfast.  I hope you all have an enjoyable day and God bless!

203 Comments on “Another Christmas Tree…Part 2.”