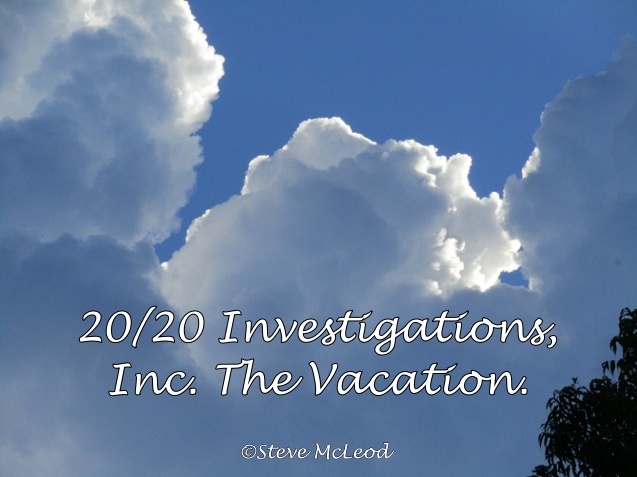 My phone! I can call for help, but, it’s dead, I forgot to recharge it last night. I check the hotel phone but it’s dead too for some reason, just like the electricity. I think someone deliberately cut the power and phone lines. Then I spot Muffin curled up sleeping on one of the lobby chairs, so I called to her, but she doesn’t move. I go over to the chair but she’s gone. I’m seeing things now. Was I drugged? Now I see Mr. Cat at his post by the door looking out toward where Kathy was on the beach. I go over to him but he disappears just as I got to him. What is going on here? Am I going crazy? I go back to Kathy’s room and…she’s lying on the bed! I run over to the bed and…she fades away. But she looked just like I remembered her, no pink hair, no tattoo. It was Karin from our last case. I have known since I first saw Kathy that it was Karin, but then…there was a change in her, it wasn’t Karin anymore.

They switched her for this other woman who looks so much like Karin, except her eyes, that’s why she uses those contact lenses to change the color of her eyes. That switch must have been made when Karin and Muffin came back from the old castle and were drugged by Clara. But if they were after Karin, why the elaborate switch with this other woman? I don’t understand this at all. But I need to find my cats! I go back to the kitchen and look out back and I notice a couple of small storage buildings so I go to check them. The first one is full of junk, hard to get in the door! Then I thought I heard a noise and I notice some movement in a small sack. I untied it and there was Mr. Cat! Meow!=Hard to breathe in there, happy to see you! And he gave me a big hug. Meow?=Where Muffin? I don’t know, I said, maybe in one of these other sacks. We checked them, but nothing, no Muffin.

Meow!=Look up high! Hanging from the steep pitched roof is another small sack. I can’t quite reach it. I hold up Mr. Cat but he can’t reach the rope holding the sack in place. Meow!=It Muffin in here, we need to hurry! I look outside and spotted a small, old box. I hope it holds me. It did and was just big enough that I could get the sack down. I opened it quickly and poor Muffin was gasping for air. Meow!=Who did this to my Muffin in big trouble now! I agree Mr. Cat, let’s go back to the hotel. I stopped first to look in the van but it was empty, and all four tires were flat. Meow, meow.=Someone is watching us. Meow.=Yes, I sense too. Yes, I can feel it too, I said, but let’s go check that other shed. It wasn’t locked so I opened the door and there wasn’t much in there except some garden tools and hoses. Someone went to a lot of trouble building this little shed from rock. Looks nice though.

That wind! There was a huge cracking, then crashing as a large tree broke and landed on the shed the cats had been in, smashing it to pieces. We rush back to the hotel and safety. Or are we safe in here? Anyway, we were all hungry so I fed the cats and there was already a lot of sandwiches made so that’s what I had. There is a lot of food here at least. After eating we went back to Kathy’s room and I told the cats about Karin being switched for another woman. Meow, meow.=She have lot of shoes in closet. What? I looked. Everything was back in the closet, and on the dresser. I told the cats it had all disappeared. They looked at each other. No, I’m not crazy. I decide we should go back to our room for now and think things over.

We checked our room thoroughly but there were no listening devices. Suddenly the cats ears go straight up! I turn to see what they are looking at. It was Karin! And she said for us to go back home, then she disappeared. Meow, meow!=It ghost! That enough, we pack and go home now! Meow!=Me agree! There’s no way for us to leave, I said, but what we will do is go look through the attic. Meow, meow!=Always you want to look for ghosts. Safer to go home. That wasn’t a ghost, someone is using some kind of projection to try and scare us away. Meow?=What you mean, try to scare us? I scared, time to leave. Meow, meow!=Me too, let’s go! Not until we find out what is going on around here. Wow, that had to be a record loud sigh from you too. Meow, meow.=You giving us lots of practice.