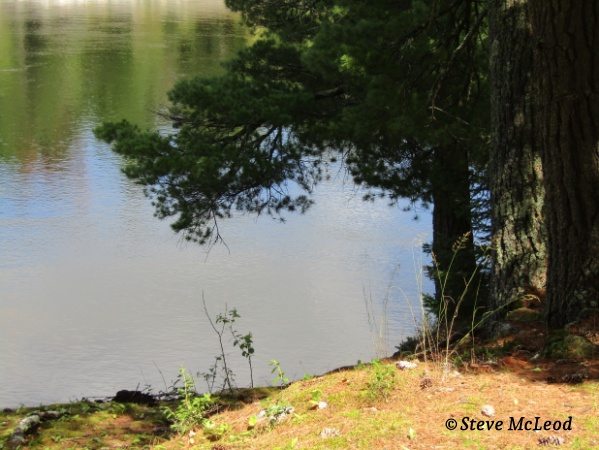 It’s been a long time but here we are once again with part 2 of our fall hike looking for those elusive glass and porcelain objects known as insulators. So, without wasting time, let’s pick up our story where we left off last week.

Dad and I started down this steep hill, with me in the lead as usual. It was actually very easy walking, with no problems. We hadn’t gotten very far when I spotted a pileated woodpecker flying overhead going uphill. “Hey look”, I said and swung around pointing out the pileated woodpecker to dad. For some reason dad decided to sit down. “Are you tired?”, I asked. “No, I’m not tired,” he said. “It’s okay if you are,” I continued, “we can stop and rest for awhile.” Now, he claims that when I turned around my hand hit him right on the nose, which knocked him down. I never felt anything and I don’t think I could have hit him hard enough to knock him down. I think he was tired and didn’t want to admit it. He started to get up. “Here, let me help you”, I said. “Okay, grab my arm”, said dad.

So I grabbed hold of his arm and gave a good pull. After all, dad was a lot bigger than me so I knew pulling hard would be the right thing to do. You should have seen how big his eyes got! Then he raced right past me, screamed, slipped on some moss and slid right into a pine tree! “You shouldn’t try running downhill,” I said, “you can hurt yourself that way.” And he did, his nose was bleeding. He claimed it was because I hit him on the nose, not because he slammed into that tree. He would come up with all kinds of excuses rather than admit he was accident prone. The rest of the way down the hill was uneventful. About half way down a squirrel chattered at us from a nearby tree. At the bottom however it was nothing but thick undergrowth. We both looked. “You go first,” said dad, “but be careful with those branches.” What a strange thing to say, it’s dad that always got hit with branches, not me. Oh well.

Off I went. I looked back and saw dad still standing there. “Are you coming?”, I called out. “Don’t worry about me,” he said, “just keep walking.” Now, that’s exactly what he said. Okay, off I went again. I finally came to a big boulder and decided to wait for dad to catch up, he was getting far behind. Then I heard him yell to keep going, so off I went again. Then I came to a small hill that went down to a stream. We should be able to jump that stream easily, but I figured I should go back up and warn dad or he will end up sliding down this hill and right into the stream. He was always doing things like that. Suddenly I heard him yell and he went sliding right past me, except he grabbed my leg and pulled me right off my feet and I landed with a thud. “I have mud on me now”, I said. Dad groaned a bit but managed to say, “Bonehead!” Hard to imagine he could enjoy that, he was covered with mud from head to toe! That got me and I started to laugh loud and long. “Very funny,” said dad. “I thought so,” I said, barely able to talk. Even a blue jay seemed to be laughing at us from a tall pine.

Dad took his glasses off, forgetting his hands were also covered with mud. “My glasses!”, he exclaimed. “Here, let me help, I’m not covered with mud,” I said. “NO!”, said dad and pulled his glasses away so fast that they went flying from his hand and landed in the stream. “AAAAAA!, my glasses!”, he exclaimed again. “You said that already,” I told him, “at least they’re in water, now you can clean them.” Dad just looked. Then he went over to the stream to retrieve his glasses. “The water is deep here,” he said. He was right. “You can reach them,” I said. “I’ll get wet”, he replied. “Just your arm”, I said, “or I can try to get them with this stick.” “NO!, I’ll reach for them,” he said. He started putting his arm in the water. “That’s cold water,” he said. “Go fast,” I told him and gave his arm a quick push up to his shoulder. “AAAAAAAAAAAA!”, he screamed. “You got your glasses”, I said, “so what’s the problem?” Seems the side of his head got a bit wet too. “Hmm, you should be more careful,” I said, “no wonder mom doesn’t want you going alone.” “If only she knew,” he said. I’m not sure what he meant by that. We were able to get across that little stream with no problems and then up the hill to the tracks. “Good,” said dad, there’s a nice hill in the sun to stop for coffee.” “But we just got here,” I said. Dad just looked. “Right,” I said, “a good place for coffee.”